The Illusionists – Magic of the Holidays, currently running at the Neil Simon Theatre in Times Square, features six spectacular entertainers that encompasses magicians, mind readers, and comedians. This marks a record fifth year of dazzling entertainment for the entire family to enjoy, from toddlers to octogenarians. In fact, children in the audience are encouraged to participate in some of the performances. The show’s limited engagement will play through Sunday, January 5th, in 2020 — so catch it now! 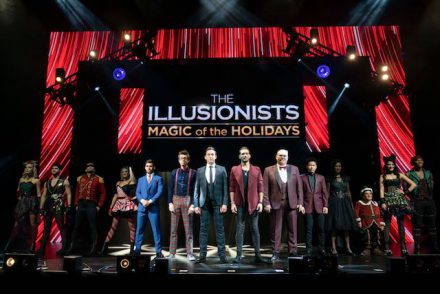 This mind-blowing holiday spectacular showcases the massive talents of six of the most incredible illusionists living on earth right now. That may sounds overly dramatic, but after you see the show, you’ll definitely agree. Here are details about each of them: 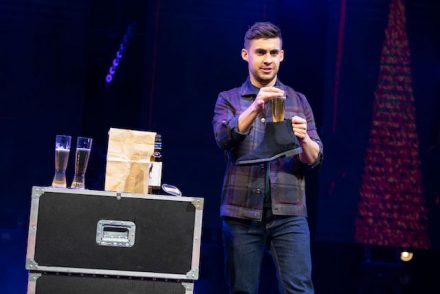 “America’s Got Talent” semi-finalist Dom Chambers is a charming and internationally award-winning magician and comedian, known for his modern take on magic, artful viral internet videos, and artistic live performances. In this show, his magic centered on liquids and glasses will astound you. Also, his internet videos have been viewed over 100 million times and his magic has appeared on many of America’s and Australia’s major TV networks. He was the first Australia-based magician to appear on the hit international TV series, “Penn & Teller: Fool Us!”, and the only Australian solo act to make the semi-finals of AGT. His critically acclaimed one-man show ‘RanDom’ was awarded the prestigious award for “Best Magic Show” at the Adelaide Fringe in 2019. 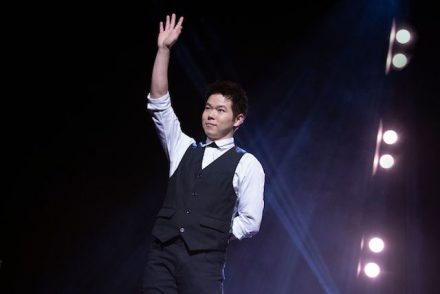 Taiwan-born Eric Chien is a rising star of the magic world, and his cards-and-colors tricks will leave you scratching your head with amazement. Raised in the USA, he has traveled around the world, and now lives in Beijing. Eric’s fascination with magic started when he was in high school. During his freshman year of college, he suffered from depression due to experiencing his first heartbreak. He locked himself in his room for nearly half a year with no human contact whatsoever, but magic became his companion. Practicing up to eight hours a day, Eric soon became a master in the art of sleight-of-hand. At the end of his sophomore year, he decided to drop out of school to become a professional magician. Eric kick-started his magic career in 2016, as a consultant for the top magician in China. In 2018, he became the first Asian person to win the title of FISM World Champion of Close Up Magic Grand Prix, the Olympic games of magic. The following year, he garnered the win for the 2019 “Asia’s Got Talent,” Season 3. After that, he became a viral magician, now lauded around the globe. 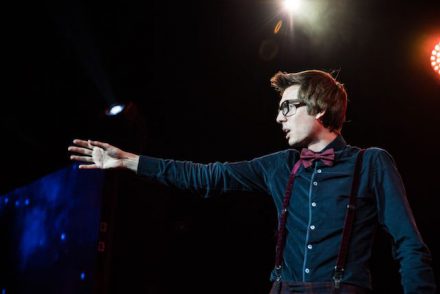 Chris Cox knows what you’re thinking. You’ll be dead certain of it by the end of the show, absolutely. He’s a multi-award winning mentalist, and the star of the BBC’s “Chris Cox’s Mind Boggling Magic” and “Killer Magic,” as well as many other shows and venues across the globe. He will stun you with his ability to know small details about the random people chosen in the audience (by another audience member tossing a stuffed animal in the air, to ensure randomness) — details that cannot possibly be found on social media or anywhere else online. He’s also an excellent comedian. Visit his site, http://magiccox.com/. 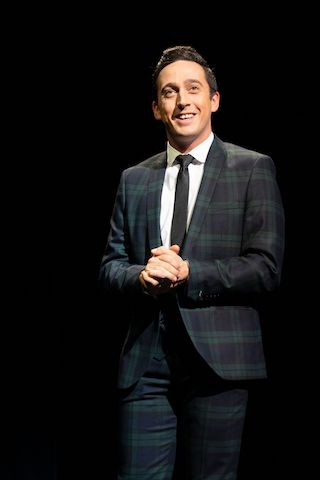 Paul Dabek is one of the U.K.’s top entertainers, and he’ll leave you laughing all throughout the show. Versatile and hilarious, he has performed across six continents, on the stages of London’s West End, BBC TV, and even headlined his own show in Las Vegas. Both the Magic Circle and the International Brotherhood of Magicians have recognized Paul’s talent, naming him Young Magician of the Year and awarding him the British Shield. Paul’s fast-paced dynamic magic, quick-witted humor, and a theatrical flair combine with a personality that resounds to the very back of the theater. Join Paul as he reveals exactly what’s up his sleeve and delves into his box of tricks, all while cheekily enchanting the audience with jaw-dropping hilarity. www.PaulDabek.com 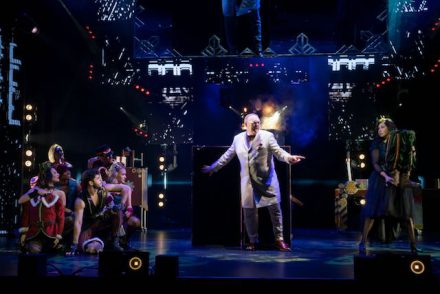 Kevin James elicits an enormous WOW. He decided at a young age that performing magic for the world was truly his life’s calling. Kevin’s style of performance is anything but conventional, with his unique comedy and magic cementing him as a world-class visual artist and one of the highest-viewed magicians on YouTube. He has performed on shows in 89 countries, and his past performances include headlining at Las Vegas casinos, starring at the Crazy Horse in Paris, royal performances for the Prince of Monaco, Prince of Bahrain, the Sultan of Dubai, and for President Obama at the White House. Kevin is a prolific inventor and magic consultant. Many of his magical concepts have been featured in movies, as well as in the shows of other famed magicians, including Doug Henning, Penn & Teller, Mark Wilson and David Copperfield. Kevin received the Creative Fellowship Award from The Academy of Magical Arts and Sciences, as well as multiple Stage Magician of the Year awards. Kevin is related to the legendary P.T. Barnum, and like his famous ancestor, he has a unique artistic vision. He wants to present the most unique show on the planet and make adults feel like a kid again, which he aptly describes as the “best job ever!” http://www.kjmagic.com/ . 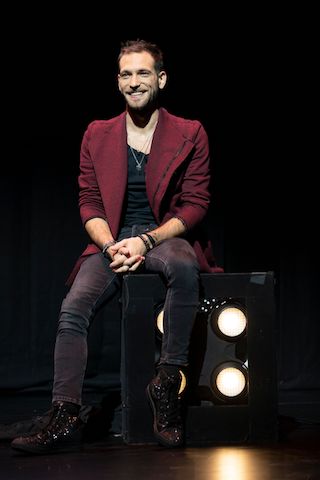 France’s Enzo Weyne held his first magic show at 11 years-old, and with humble resources. Now, he lights the stage of Broadway with his stunning light magic. He spent a year as an engineering student, learning how to draw up plans, put his ideas on paper, and understand mechanics and electrotechnics – which has served him well in his unique show. He was also curious about psychology and the paranormal. It was Enzo’s performance on “France’s Got Talent,” where his imagination and maturity stood out to both the audience and the jury. A couple of years later, Enzo mesmerized the audience of Le Plus Grand Cabaret du Monde. Since then, Enzo has been considered the rising star of magic, and returned to “France’s Got Talent,” where he again stupefied the jury and the audience by making a helicopter appear on stage — an act that had never been seen before on television. In 2015, at 26 years old, he stepped on the stage of the mythical Casino de Paris to premiere his show, Beyond Illusions. It was the starting point for his magical life adventure. www.enzo-illusion.com. 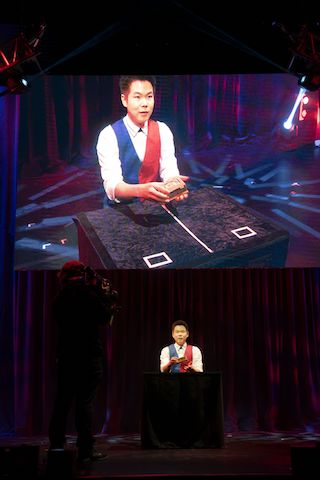 Since The Illusionists’ 2014 Broadway debut, this blockbuster touring magic spectacular has mesmerized more than 276,000 audience members of all ages — in four different incarnations: Witness The Impossible, Live on Broadway, Turn of the Century, and now Magic of the Holidays.
Along with creative producer Simon Painter, the creative team for this show features the talents of executive producer Tim Lawson and director Neil Dorward.

TICKET INFORMATION
Tickets for The Illusionists – Magic of the Holidays are now on sale at www.ticketmaster.com and at the Neil Simon Theatre box office, 250 W. 52nd Street, between Broadway and 8th Avenue.

LOTTERY: There’s also a limited number of $35 tickets will be sold to winners in a digital lottery drawing. For details and entrance to the digital lottery, visit https://lottery.broadwaydirect.com/show/the-illusionists/.. For all performances, the Lottery opens at 9AM and closes at 5PM on the day before the performance, and tickets are limited to four per person. Winners will be notified within minutes of the drawing and will have one hour to pay for their tickets online with a credit card. Tickets can be picked up at the Neil Simon Theatre box office 30 minutes prior to showtime. Photo ID is required for pickup. Seat locations and the number of tickets awarded by the lottery are subject to availability and blackout dates may apply. 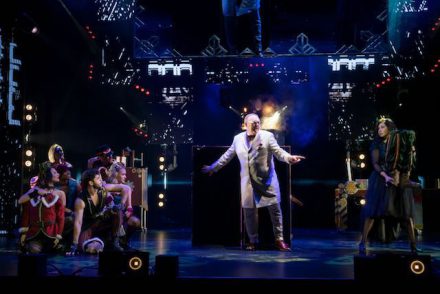