We interviewed acclaimed photographer Brian Hamill, author of “Dream Lovers: John and Yoko in NYC – The Photographs of Brian Hamill.” A photographer of icons of popular culture for 50 years, his photographs have been published in the New York Times Magazine, Life, Time, Newsweek, Vanity Fair, Esquire, Rolling Stone and the Saturday Evening Post, among others. He also worked as a still photographer on more than 75 motion pictures, working with giants of film-making, such as Woody Allen and Barry Levinson. His photographs have been shown in numerous solo exhibitions in the United States, Canada, UK and Italy. 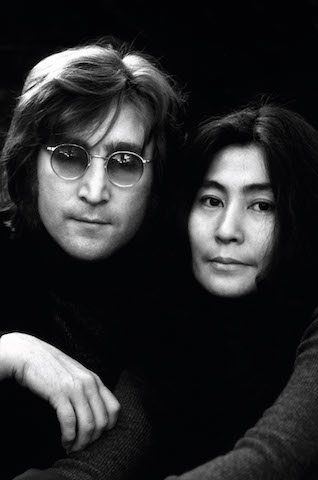 “Dream Lovers,” published last month, is a collection of photographs that Brian Hamill took in 1972 and 1975 of John Lennon and Yoko Ono. With a foreword by Alec Baldwin and introduction by his brother Pete Hamill, this fine collection of many unpublished photographs of the famous couple give us access to the real John and Yoko in the city they loved and adopted as their own. Dana Delany and Barry Levinson contributed souvenirs and commentaries, while charming anecdotes by Brian Hamill, from the afternoons he spent photographing Lennon, provide new glimpses into the real personality of the famous Beatle.

Why are John Lennon and Yoko Ono still relevant today?
Because they were a very famous couple, I think of the magnitude of Romeo and Juliet. People just referred to them as John and Yoko.

Do you think they were the most famous couple of the 70s?
Without a doubt

How are they relevant to Millenials today?
Once in a while I hear Millennials saying, “Oh, I like the ‘back then’ music.” For me, the Beatles and the music of the 70s will always be pertinent and meaningful. The music is romantic.

The title of the book is “Dream Lovers.” Do you feel that today’s generation may find this type of love out of date?
Maybe. This generation likes rap… to me, this type of music is more like machine guns…there is a hostility to it and not much romance — especially the early rap, when rappers put down women in their songs. 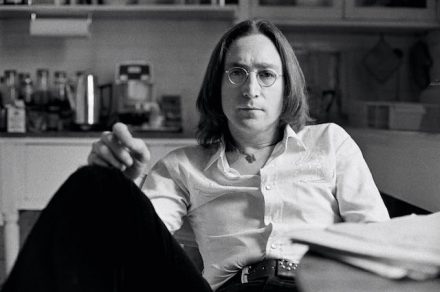 Do you think John Lennon was a feminist?
Well, he called himself a “house husband.” Yoko was taking care of the business end of things for them and he was all over being a father to Sean, probably because when Julian was born, he was very involved with the Beatles mania… they were touring everywhere and they were younger, and he could not be there for Julian much. He wanted to do better with Sean.

Tell me about the time you were assigned to take pictures of John Lennon and Yoko in their home.
In October 1972, I got a dream assignment from Parade magazine to photograph John and Yoko, who had been living in NYC for about a year. It was on October 13, 1972. I had recently shot John on August 30th at Madison Square Garden. My brother, Pete Hamill, had written columns about John and his troubles with immigration – he was a very influential columnist, and John knew him.

I expected it to be a big production with hair stylists, assistants, PR people, and make-up artists – that whole cluster of people who always accompany stars, as I am used to seeing with other celebrities that I take pictures of, but when I rang the bell at 105 Bank street, John himself answered on the intercom and told me to come up two flights of steps. It was a little apartment, not a big brownstone… with no elevator, nothing fancy. When I arrived, John Lennon introduced himself …hahaha…as if I did not know who he was.

The apartment was a large room with a bed inside and a spiral staircase going upstairs. There was only John and Yoko there: no PR people, no teams, no bullshit…I was relieved because usually stars have so many demands when you shoot them. He never asked me to do anything, he gave me no instructions or restrictions… they were both so pleasant. We shot pictures in the apartment, then we went upstairs.

“What else would you like?” asked John.
I suggested going for a walk in the neighborhood, so we did. We went by mom-and-pop stores along Bleecker street, in the heart of the village, and the village was very different back then. There were no upscale boutiques, only bookstores and shops. We went into a store because Yoko wanted to buy a sweater. The guy had a bit of an attitude when he recognized John and Yoko, trying to pretend that he was not impressed. He was in a hammock and never got up. John was a bit annoyed, but stayed cool. When Yoko came out of the store, John carried her bag for her. Then we walked to the end of the pier by the river as the sun was setting. It was a pretty October day, late afternoon.
John said, “This river is magical”.
The pier was different back then. Along the way, both of them showed me their humanity. They were very humane towards ordinary people, they were normal and nice with everyone, and he reminded me of someone from my neighborhood in Brooklyn. John Lennon also grew up in a working class neighborhood like me, and he remained humble, not a snob at all. He was very humorous, too. 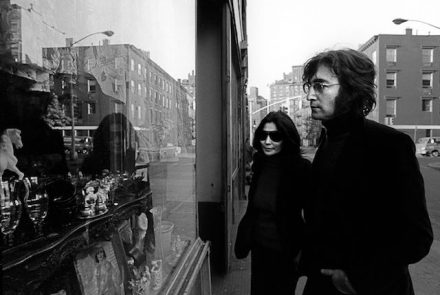 Tell us about the second time you took pictures of John.
Three years later, I photographed him at the Dakota on an assignment from Rolling Stone. He opened the door himself again, Yoko wasn’t there…
“It’s only you and me, Brian,” he said, “Yoko is busy in her office.”
He made me feel relaxed again. I shot him on the bed, and he put a couple of framed posters and photographs in front of him. After that, we went into the other room, where there was a jukebox. He asked me if I wanted to listen to anything in particular. I asked him if I could listen to Marvin Gaye because I didn’t want to do the obvious thing and ask him for a Beatles song.

As I was shooting away, John was singing along with the song.
“I think this Marvin Gaye album is the most inventive album of the seventies so far,” I said to him, then immediately caught myself. “Oh, shit! What the fuck did I just say?!”
John had just put out four great albums and he might have felt insulted. What a fucking faux pas!, I thought, but he was totally cool. There was a slight pause and he said, “You are right, it’ s a fantastic fucking album.”
Then I asked him to play something he liked, so he played “Shout” by the Isley Brothers. He sang along it, too.

We went to the kitchen and while we were talking, he wrote words on a piece of paper at the table all of a sudden. “I have an idea for a lyric,” he explained.
Then after he was done writing, he said to me, “I’m foocking hungry. Are you hungry?”
I was also hungry. It was around 3pm.
“What about a toastie?’ he asked.
“What’s a toastie?”
“Oh, you guys call it a grilled crisp cheese or something…”
“Ah, sure,” I said, “A grilled cheese!”
In the corridor to the kitchen there was an Asian woman ironing, and I thought he was going to ask her to cook it. But instead he went over to the counter, took a nearby butter dish, opened the refrigerator, and pulled out some cheese. Then he took bread out of the bread box, opened the white cupboard… and got out a big black frying pan.
“Is this guy going to make me a grilled sandwich?…” I thought, stunned.
With speed and skill, he cooked two tasty grilled cheese sandwiches, and added chips on the side. They were delicious! I asked him about his Rolls Royce, and he said he got rid of it. “I gave it to that asshole, Allen Klein. Then I got a completely black Rolls with tinted windows. When we were driving through Spain in it, I noticed how old women would cross themselves when we drove by, and realized they thought it was a funeral procession, ha ha.” We both laughed. 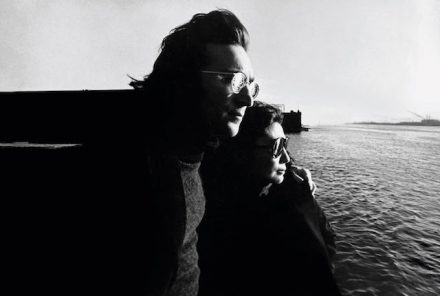 You can find more of Brian’s exchanges with John Lennon in his new book. It’s an uncanny evocation of another time and brings us back in the world of John Lennon and Yoko Ono through stunning pictures that capture all their magic and unassuming style at the same time. It’s the perfect holiday gift for anyone who loves rock music, the Beatles, New York City, amazing photography, and cultural history. Order it HERE.
For more information about Brian Hamill, visit his website HERE.