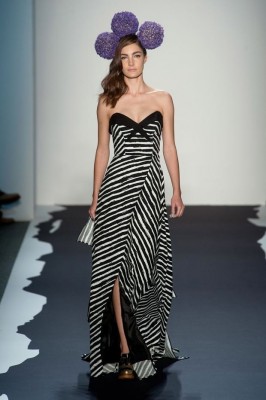 Aside from the bold and colorful prints in the collection, the nails were the star of the show at Emerson SS 2014. In fact, you might say that the nail creator herself, Miss Pop, manicurist for Ciate, was the real show backstage.

You can’t miss her as she lights up the room in a royal blue dress and black low-slung apron, filled with the tools of her trade. Miss Pop, named after “Iggy,” she says, is vivacious and charismatic with a bright red lipstick smile that is the perfect backdrop for her creations. Holding clear boxes that display her press on nails, Miss Pop explained that the prints in the collection were the inspiration behind her nail designs for Emerson.   “The black and white stripe is a reference to a print in the collection. Black and white is huge for spring.” Miss Pop said that the stripes are painted imperfectly in a rough, matte texture. In keeping with the punk garden party inspiration for the collection, Miss Pop added a piercing through the middle fingernail with a safety pin. 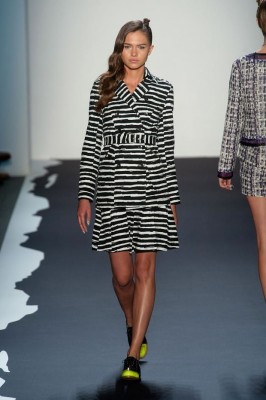 In addition to the black and white stripes, Miss Pop created floral designs to complement the floral prints in the collection. One is a field of allium, a fluffy purple flower that inspired Emerson’s designer, Jackie Fraser-Swan.  The allium is Fraser-Swan’s favorite flower, and her collection is sprinkled with the motif. 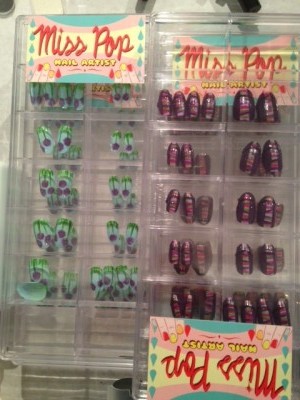 The third nail design was a purple nail with a row of colors through the middle. “This is an abstraction of the final walk with the purple flowers,” said Miss Pop.  In between the stripes of color there is a hint of the natural nail, which Miss Pop said is fresh and sexy.

The nails are really user friendly, and just stick on and can be easily removed. ”I just did Becky G, do you know her? She just did a song with J Lo. She loves these nails cause she can just change them in and out,” said Miss Pop. 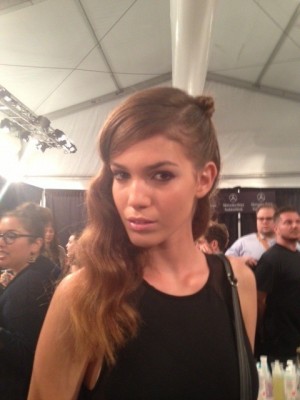 With such extravagant nails and the bold prints in Emerson’s collection, the makeup and hair were decidedly understated. Lead make-up artist, Tia Hebron for Bobbi Brown, created a soft make-up look on the models using Hydrating Gel Face Cream and Foundation Stick on the skin. The cheeks had Pink Quartz Shimmer Brick, and the eyes were a light smoky with a mix of shades, Heather Long Wear Cream Shadow and Mulberry Eye Shadow. The eyes were also lined with Violet Long Wear Gel Eye Liner and Black Plum Long Wear Eye Pencil.

The hair, designed by Jorge Luis for Prive,  was swept to the side with soft waves to allow the collection to stand out. Luis rolled strands of hair around the barrel of a curling wand and then let the curls fall softly, and not too tight. “You don’t want to look like Shirley Temple,” said Luis. Except for the dramatic allium flowers adorning the models’ hair at the end, the look was very understated.