The one and only Val Garland was the lead makeup artist for HACHE spring 2014 fashion show. Val wanted to play off the tough girl chic feel of the collection by creating her own version of the “Teddy Boy” tough look. She wanted to complement the clothing with strong, defined and poetic designs. Val’s main focus was all about the eyes. 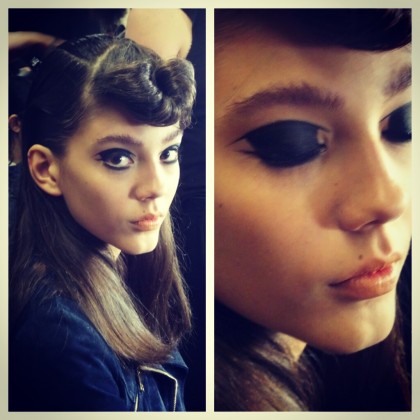 To get the look apply M.A.C. Coffee eyeliner underneath the bottom lash line, starting under the pupil. To softly blend out the line, use a q-tip to create a soft, thick dramatic line. Next work your way onto the eyelid by making three thin lines across the lid; the lash line, middle of the eyelid and above the crease of your lid. To create these three lines use M.A.C. Black Chrome liner mixed with M.A.C. Mixing Medium. To fill in and create the actual square shape,  use M.A.C. brush #210 to outline the box and M.A.C. brush #242 to fill the square. To keep the intensity going the makeup artist decided to brush the eyebrows up, giving a rough edge. After she finished by lining the eyes and then used M.A.C. ‘False Lashes’ Mascara to create full thick lashes. 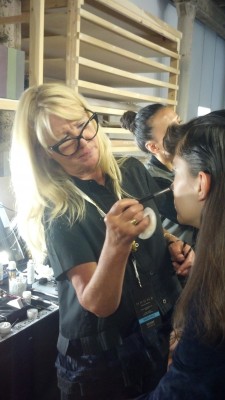 Since Val played up the eyes so much she wanted to keep the rest of the face looking fresh. Creating natural smooth skin, using a fan brush she applied M.A.C. Mineralized Moisture Foundation. By using the fan brush gives you the ability of receiving full coverage with the appearance of a natural finish. With lips she wanted more of a matte chalky finish. Val mixed orange and nude tones with M.A.C. Mixing Medium to create a soft, sickly salmon color. To build depth she used M.A.C. Lovers Lane Velvet Ease lip pencil to the center bottom lip and diffused out. 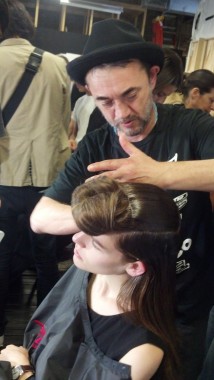 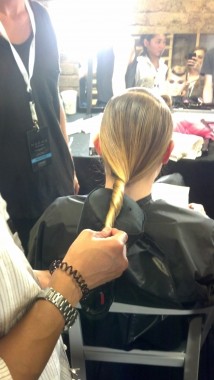 Eugene Souleiman was the creator and lead hairstylist for HACHE spring 2014 fashion show. Eugene was excited to create something outside the norm. He wanted to create bad hair for a bad girl. Eugene started on the top of the hair about 2”wide and 3” deep sections and brushed forward. He then used chopsticks to roll the hair back to create a modern day 50’s hairdo. To keep the hair in place Eugene used Wella Super Set finishing spray. Eugene wanted to keep the rest of the hair simple but still tough. He then used Wella Hydrate Mask to smooth down the side and back of the head giving the hair a flat shine effect. To give the rest of the hair some texture he then grabbed all of the hair at the nape of the neck twisting it into a low bun. He kept the model’s hair in a bun for several minutes to create a slight bend throughout the hair. Once he took the hair out of the bun, he would
comb through the hair with his fingers then tuck the hair behind the ears.

Throughout HACHE’s collection you will find a soft lilac color, complimenting the black studded belts. Lulu Cooper was able to create a custom color to continue the look of “Teddy Boy” tough. For the base of the polish she used Essie polish in Figi. She then would add a touch of pure white pigment to dilute the color. To enrich the blue undertone of lilac she mixed in a touch of a sheer blue based shimmer polish. Though the blue polish had a touch of shimmer, once mixed with the white pigment it dried matte. Even though Lulu created a custom color, I feel you will be seeing this color a lot in Spring 2014.