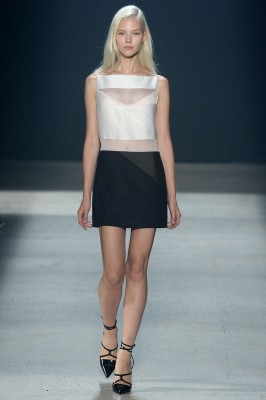 The hair, make-up and nails at Narciso Rodriguez were all about minimalism and a natural look. It should be easy and take no time at all, but not with Rodriguez, the master of perfection. The natural look takes a lot of work, but the result was worth it, with the neutral shades of the collection blending in flawlessly. 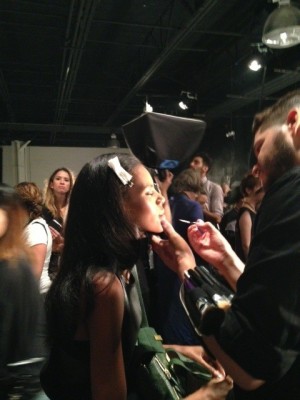 Lead make-up artist Dick Page used all Shiseido products to create a no make-up look. On clean skin, Page defined natural cheeks using a blend of two lip shades, the new Lacquer Rouge in Metalrose and in Hellebore. Lacquer Rouge is glossy and the shades mixed together were a pinkish plum. The eyes had the most done to them and were designed to appear as if the make-up was slept in and left from the night before. To achieve this look, Page used new Shimmering Cream Eye Color in Shoyu, a dark brownish color, along the line of lashes and then new Shimmering Cream Eye Color in Yuba, a pale beige color, was applied to the inner corner of the eye. The lashes had Perfect Mascara Full Definition in Brown mixed with a clear gel for sheen. The lips were barely there with a beige colored Lacquer Rouge in Camel. 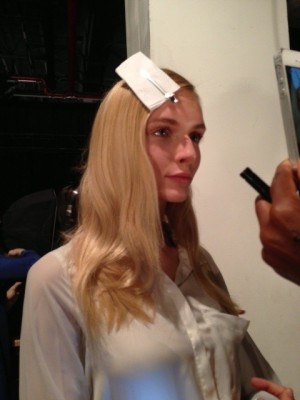 The hair design by Paul Hanlon for Morrocanoil, was on trend with much of the hair this season. It was softly textured and loose, with that undone look. Morrocanoil products are so hair friendly that they feel as if nothing is on the hair. They also condition the hair magnificently. Hanlon said that the quality of the hair was important for this look that was inspired by the confident, naturally beautiful woman of today. 1940s Italian film actress, Monica Vitti, who had a sexy and sophisticated part on the side and a soft wave in front, also inspired the hairstyles. 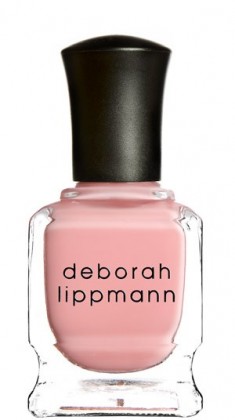 Not to be outdone in the undone department, were the nails by Deborah Lippmann. Holding the two shades used for her nail creation, Lippmann expressed how difficult it was to come up with the perfect shade of natural nails. Lippmann said that this look took the longest ever for her to come up with in collaboration with the designer. The final choice was a sheer coral shade called P.Y.T. (Pretty Young Thing), Lippman said, breaking into the song by the same name. Yes, it was named after the Michael Jackson song, and Lippmann said she was afraid to say the name to Rodriguez, thinking he might not like it, but he did. So in the end one sheer coat of P.Y.T. and a clear Flat Top matte topcoat finished off the look.