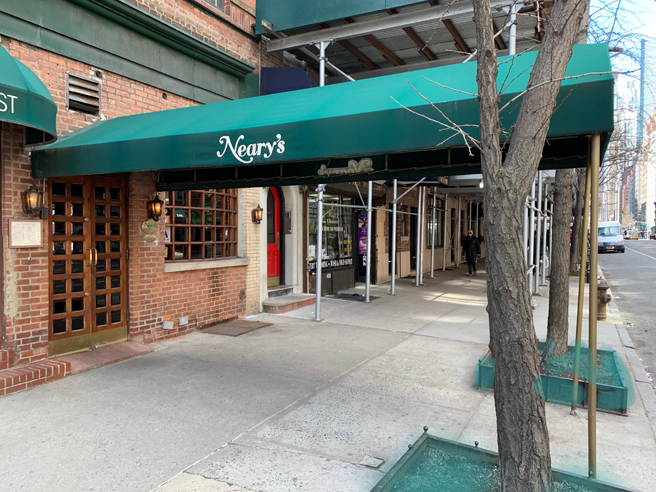 Neary’s Restaurant opened its wooden doors on St. Patrick’s Day in 1967.  Unlike a conventional Irish pub, this fine dining establishment elevates the experience with many of the traditional dishes served up from the land that gave the world James Joyce, Bono, James Galway, Mary Harris (Mother) Jones, Iris Murdoch, Liam Neeson, Sinead Kane and the list goes on and on and on.

I walked inside with a cap on my head from the brisk chill and March winds and was politely asked to remove it by the barman, Thomas. I meant no offence so I took off my hat and sat at the bar to enjoy lunch.

Following is what I recently discovered at this emerald gem. 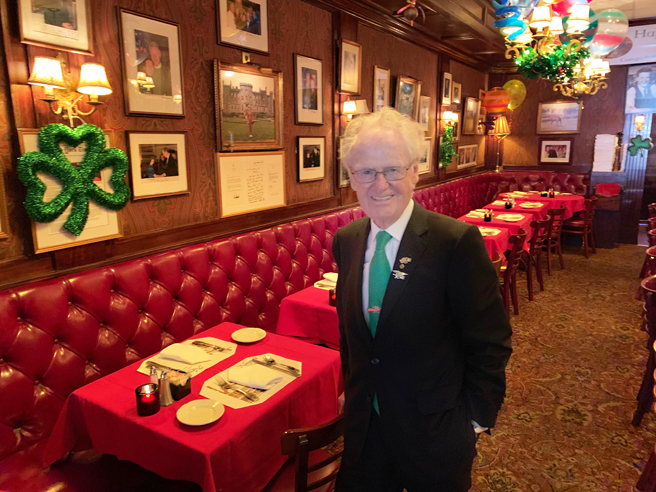 Jimmy Neary has owned and operated this family establishment for 52 years. “I rarely take a day off and we are open every day except for Christmas,” he says to me with a bright smile. He is always dressed impeccably with a collared shirt, colorful tie and tailored suit. The majority of his employees have been working at Neary’s for 20+ years.

This speaks volumes for the competitive restaurant business in New York City. 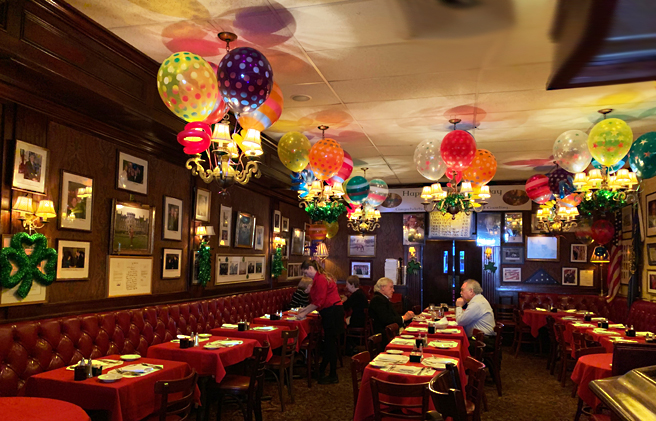 The dining room is handsomely appointed with red banquettes, mahogany wood veneered walls and light fixtures that are currently decorated for St. Patrick’s Day which is Sunday, March 17th. However, the city is hosting the popular parade on Saturday, March 16 this year.  The walls around the entire establishment are filled with pictures, awards and memorabilia from the famous celebrities, professional athletes, U.S. presidents and elected officials who have dined here. Jimmy (Mr. Neary) has many stories to tell about the people who have passed through his door near the corner of First Avenue and 57th Street. 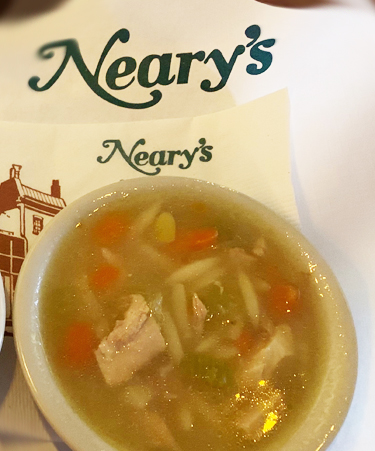 I recommend that you start with their homemade French Onion Soup or their Soup of The Day. During this visit, the Chicken Soup (above) was savory and brimming with plenty of chicken, carrots, onion, orzo pasta and celery. It’s the perfect bowl of comfort to take the chill out of the early spring air. 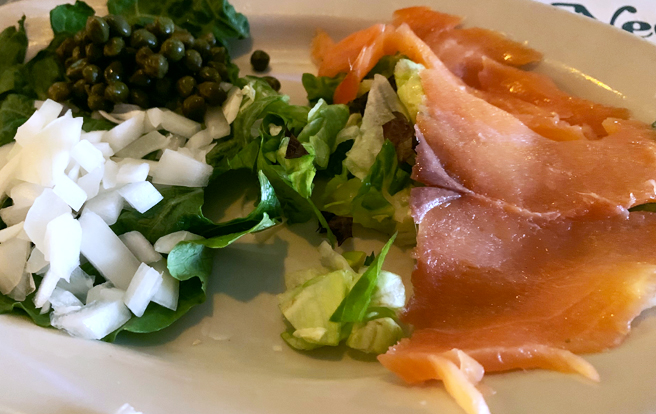 The Wild “Irish” Smoked Salmon is a tasty appetizer. The salmon comes with a side of chopped onions and capers. Fresh and flavorful, this plate is perfectly balanced with the smoky notes from the fish and good textures from both the root vegetable and capers. 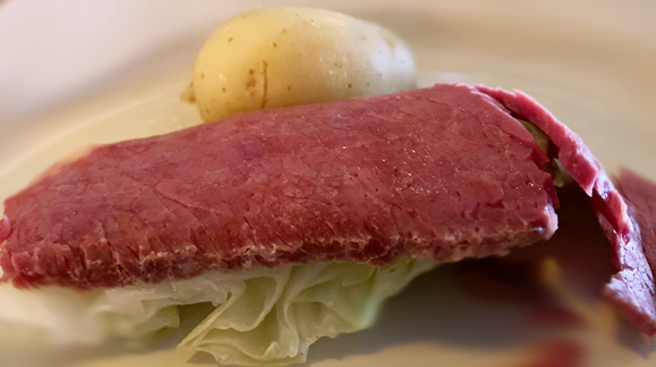 No respectable Irish restaurant would be complete without a healthy portion of Corned Beef and Cabbage. I happen to know the history of this dish and it’s not a pleasant one (the Irish had to hide the beef at the bottom of the pot and cover it with cabbage during rations in their country as well as their plight with the British). This meal became very popular in the U.S. during World War I and World War II via our American Vets.

Neary’s prepares the meal along with a side of vegetables or potato. The sliced beef is mouth-watering and they offer the entrée with your choice of golden or spicy mustard. Delicious! 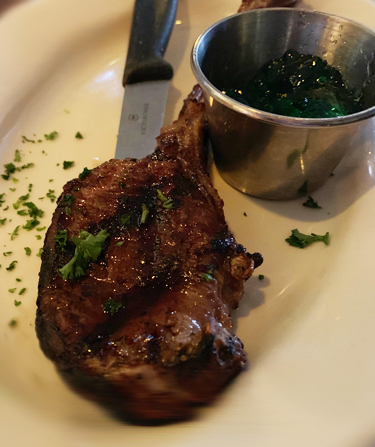 Entrées include Broiled Scrod, Dublin Broil with Mushroom Gravy, Filet Mignon and poultry options. The Lamb Chop (above) is seared to perfection and comes with a side of mint jelly. The flavors and aroma create a parade of perfection for the taste buds and olfactory lobe. There is something that comforts about an Irish meal in America as we toss away winter and welcome the warmer months on the East Coast. 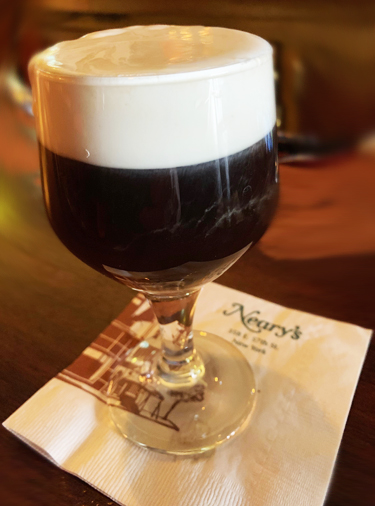 Their dessert menu includes items such as Home Made Rice Pudding, Chocolate Mousse Cake and Butterscotch Sundae. However, I recommend their Irish Coffee (above) — a dessert and beverage combo — think of it as a sweet digestif with a kick in the backside. 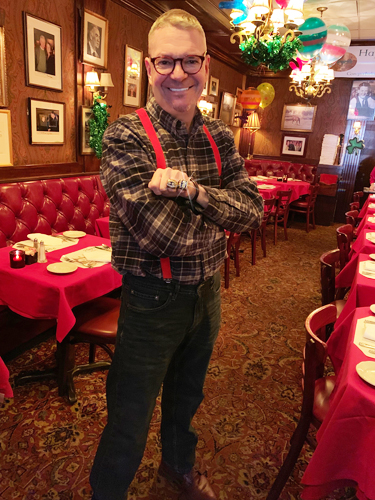 I sat and spoke with Jimmy in his restaurant. He is one of the most gracious, kind and witty men that I’ve ever met:  He is someone whom we New Yorkers strive to be or befriend and he understands what he is doing — he still talks with a strong brogue after more than five decades.

As we spoke, he showed me his array of honors and awards:  His restaurant is a fabulous time capsule with pictures of Presidents, celebrities and professional sports figures. He graciously took this picture of me wearing the rings given to him by a player on the New York Giant’s.

What impressed me the most were his spirit, personality and humor as well as his corned beef and cabbage. How awesome is that!?  Ireland is also part of my ancestors’ heritage. My great, great grandmother was born in that country.

This is exactly what America needs today: A little kindness, a good meal and a wee bit of heart from the homeland that gives us more beyond shamrocks and the shillelagh. I’m sure that many of the artists, politicians and athletes mentioned above would agree.

Note: There is a dress code at Neary’s: Come dressed in your very best.

P.K. Greenfield is the BNNYC City Pulse and Metro Man Editor. He is a freelance writer contributing to several publications including, Millennium Magazine, Passport, British Airways Magazine, i-Italy and The Wall Street Journal.

Listen Up! "Beauty Is Your Business:" Our MouthMedia Podcast

Get Serious About Yoga For Spring