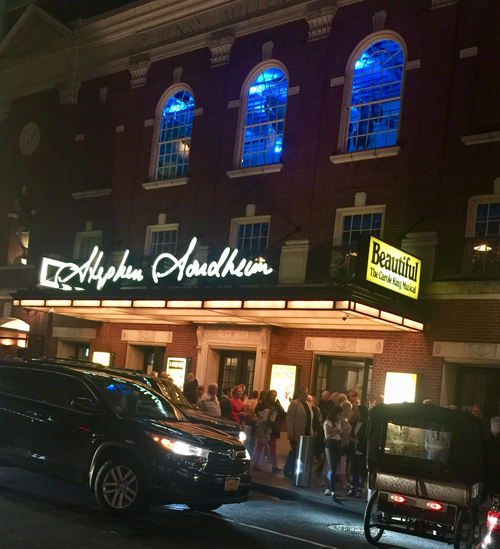 The Brill Building at Broadway near 49th Street is a short walk to the Stephen Sondheim Theatre (above) on 43rd just off of Times Square. The reason that I mention this is due to the fact that back in the day, the Brill Building was the hub, the nucleus and pinnacle for young musicians, lyricists and all artists determined to break into the pop music industry. This genre dominated the American charts in the period between Elivis Preseley’s army enlistment in 1958 and the onset of the British Invasion in 1964 with a bit of Tin Pan Alley near by. The building was literally a factory with tiny and primarily windowless studio rooms containing an upright piano and paint chipping from the walls. It still exists to this day, but its vibrant history has moved away as the music industry changed and technology developed. It’s also the place where a teenaged Carole King composed many songs and got her keys and voice into the music biz. “Beautiful: The Carole King Musical” tells the sincere and daunting story of how this young girl from Brooklyn rose to success and became a household name around the world. 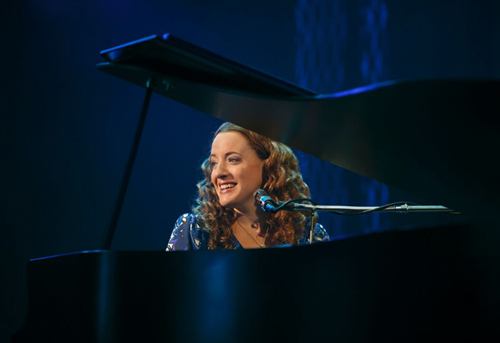 Abby Mueller (above) is currently in the shoes of her sister, Jessie, who originated the role of Carole King on The Great White Way. After creating the role on the national tour, Abby gracefully takes over the part with amazing pipes and performs on Broadway like a troubadour. Her presence and voice conjure up the spirit and determination from Carole the teenager to the confident woman who composed many songs in a testosterone driven business. This powerhouse performance transcends not only the journey of the singer/song writer but also encapsulates a powerful energy that makes the rafters shake and pulls the audience out of their seats. Ms. Mueller’s talent is obvious but what makes this musical so brilliant and timeless is not only the score but also the book written by Douglas McGrath. He penned a perfectly balanced story without red herrings, inside jokes, or a heavy fist to convey the drama; he saves the vibrato for the songs – his writing style simply weaves a complex tale of the human condition and notoriously brutal music business with intelligence and compassion. The story is witty, smart and entertainingly informative and captivating while the leading lady resonates or belts out every high and low note. 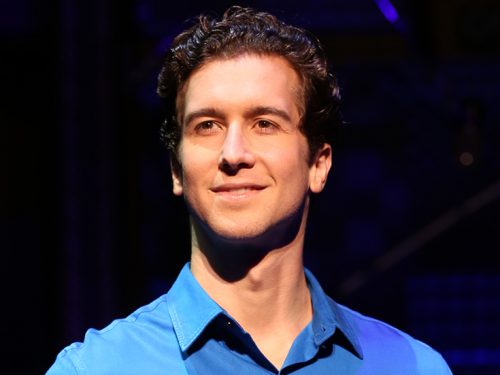 Lyricist, Gerry Goffin (played by Evan Todd) was the husband of Carole King and father of their two daughters. The duo were at the peak of the music charts in the early1960’s with pop songs like “Will You Love me Tomorrow”, “Take Good Care of My Baby”, “The Loco-Motion”, and “Go Away Little Girl”. They wrote and scored many songs for various artists including Little Eva, Neil Sedaka, The Drifters and The Shirelles, etc. Evan Todd performs the part in perfect harmony with a good deal of swagger, a heavy Brooklynese/Queens’ accent and smooth crooning that would make any teenage girl and her mother swoon. Sparks fly, both in the industry and the family unit, as their story progresses. 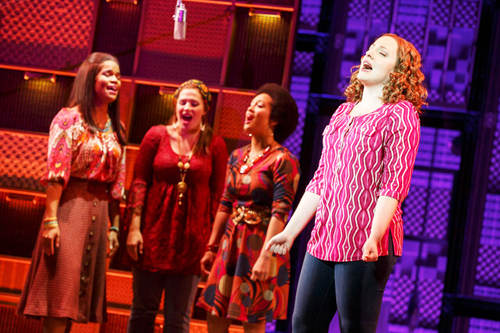 The ensemble performs multiple roles and keep everything rolling forward — the formula has the precision of a metronome. Kara Lindsay as Cynthia Weil has a remarkable voice and hits the stage with poise and pipes not seen or heard since her debut as Katherine in “Newsies”. Ben Jacoby (Barry Mann) has several tunes that would force a falsetto to blush. Paul Anthony Stewart as Don Kirshner brings humor and wit to the business called show.

One of the best lines in this musical sarcastically states, “People in show business are known for their kindness.”  It’s also note worthy that the set includes a single grand piano, a spinet and piano lamps that glide across the stage with the technique of an arpeggio. In other words, it’s beautiful to watch. 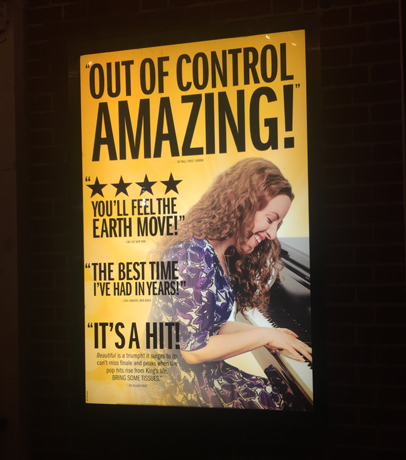 Opening in 2014, “Beautiful” continues to wow the audience with a new Mueller at the mic and piano seat.

This is one of the best reasons to visit NYC, see a Broadway show and learn a little bit about how one woman who wanted to be an elementary school teacher and became a super star through hard work, perseverance and a great deal of talent. 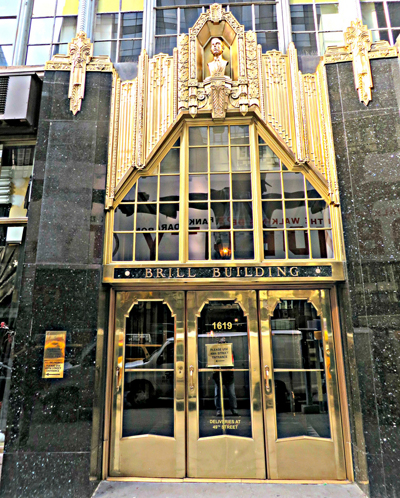 It’s a quick stroll between the Brill Building (above) and the Sondheim Theatre.  Carole King’s story is more rocky during the birth of AM radio and  the jukebox as well as black and white TV bandstands — her journey begins in Brooklyn, she conquers the vinyl industry in California and is a now a permanent fixture at the Rock and Roll Hall of Fame in Cleveland, Ohio.

Read City Pulse every month for the latest happening in and around New York City.

Beauty & the Best: Organic Goodness for Your Skin