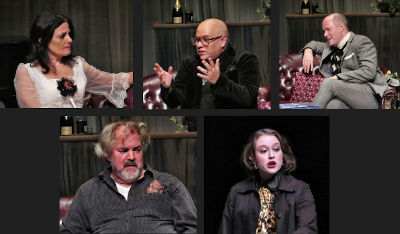 The August Strindberg Repertory Theater within the Theater for the New City is one of NYC’s cultural offerings that showcases originality and boundless creativity. It’s surprising affordable, intimate, and its plays will envelope you into the realm of talented people who genuinely love their craft. What would NYC be without theater? The TNC is renowned nationally for its dedication to nurturing the brightest established and emerging playwrights who experiment with new forms, occasionally head-kick traditional expectations, and aim to bring something fresh and thoughtful into the world — and that is exactly what the Strindberg Rep’s recent production of Ibsen’s “Hedda Gabler” achieved. 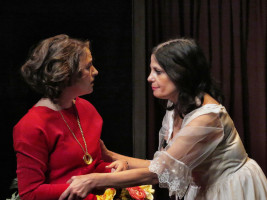 Translated, adapted, and directed by the impressive Robert Greer, the 1890 “Hedda Gabler” was reimagined as an academic rivalry between George Tesman and Eilert Lovborg in 1981 in Oslo, Norway, when computers were still part of a distant future, and Hedda was conceived as a bored, manipulative socialite. Greer did a superb job of retaining the play’s core message while making it even more relevant to this modern era. Spoiler alert: don’t read the rest of this paragraph if you don’t want to know its plot and surprise ending. In Greer’s adaptation, true to the original, Tesman’s book retains its dry, pedantic focus while Lovborg’s delves into the future instead, predicting the ubiquity of personal computers, as the two men compete for the same academic chair. Tesman is living beyond his means with a bored, materialistic Hedda, who holds sway over Lovborg and his assistant, Thea. Hedda ensures her husband’s success, thus bolstering their income, by encouraging Lovborg’s relapse into alcoholism and keeping the lost manuscript he abandoned while on a bender. She burns it. Suicidal, Lovborg kills himself. All would be well in Hedda’s world as a result, if not for lascivious Judge Brack, who is the male version of Hedda in many ways and could even represent her mirror. He knows she provided Lovborg with one of her father’s two pistols, the pistol he used to take his life, and uses this knowledge for emotional blackmail, inserting himself into her life and bedroom. Hedda, ruled by no one, uses the other pistol on herself to escape Brack’s trap. 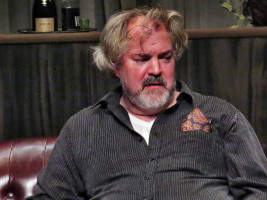 Hedda’s character was the play’s centerpiece, masterfully played by Natalie Menna, who imbued her with a complex, nuanced mix of rebellious intelligence, frustration, tenderness, strength, deviousness, stubbornness and flirtation, much like the bored and self-centered Scarlett O’Hara character in Gone with the Wind. John Cencio Burgos was Tesman, adept at being boring and obsequious, as well as slightly jovial and naive so as to render him likable and inspire pity. Mike Roche was a deviously friendly, somewhat unctuous, and boundary-busting Judge Brack, convincing as a man who would be tough to boot out of your life. Brad Fryman should be highly lauded for his portrayal of Lovborg. You could practically see and hear his inner turmoil roiling on the stage as he plunged head-first back into his bête noire, alcoholism. He brought a necessary depth to the role as a visionary battling his addiction. Bailey Newman as Thea was a light and refreshing touch for contrast. She expertly played the innocent ingénue who was easy to manipulate, a young woman devoted to her assistant job and naturally eager to do the right thing. They were a strong cast of professionals with copious theater experience, expertly directed by Robert Greer.

How To Fix Oily Hair For Good, From A Master Hairstylist