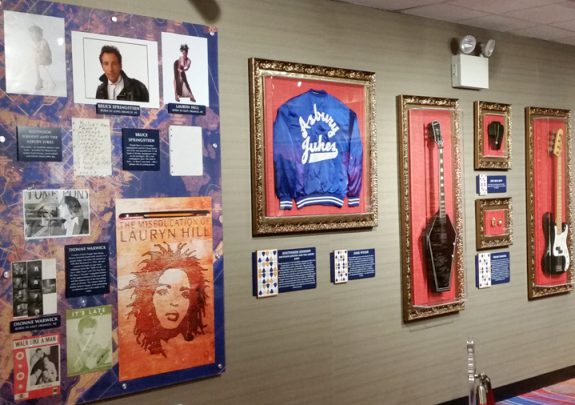 The decayed, abandoned and tarnished doors of Trump Taj Majal in Atlantic City, NJ recently re-opened with timpani, a head bang and fists in the air as The Hard Rock Hotel & Casino took over and gutted the property.  The spacious building is currently owned and operated by the U.S. native Seminole Indians from Florida.

You can hear the roar from the boardwalk.

The new vibe, spirit and commerce are attracting the masses from near and far to see and hear the latest attraction in Atlantic City – it’s an intoxicating space filled with glitz, pulsating beats and twang of guitars banging out a sound from several distinct lounges,  as well as a 7,000 seat theatre that packs in the fans with live music from Maroon 5, Elvis Costello, Bob Dylan, Rock of Ages and more.

Several outfits from popular recording artists adorn the lobby and pose on “dummies” in the massive space that takes a skateboard or golf cart to explore. The building is humongous with a larger nod to fashion off the runway and appropriately on the stage.

From pop, rap, jazz and rock, following is what exists in museum quality in AC, NJ. 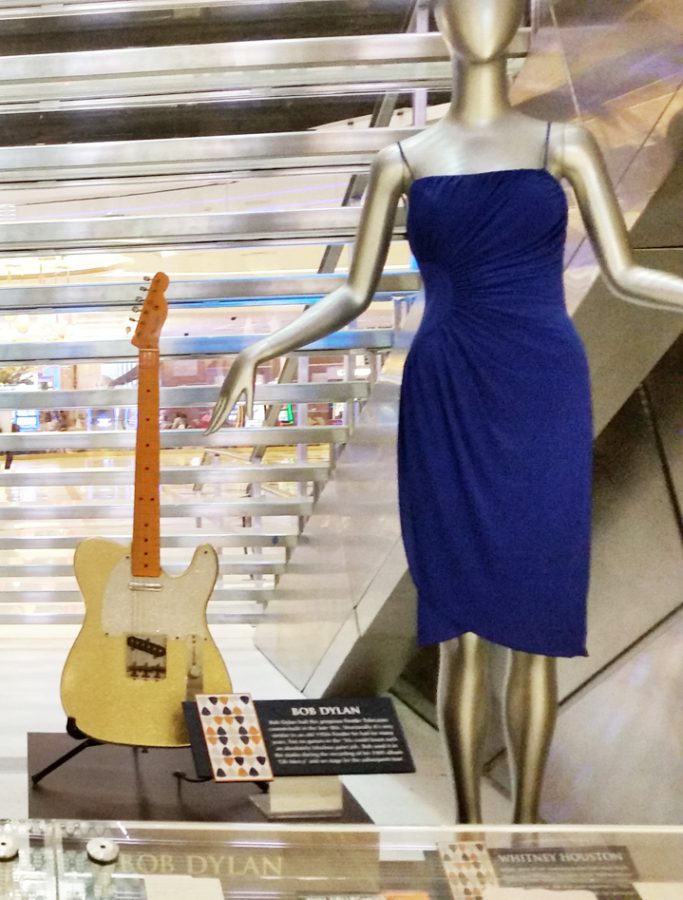 Whitney Houston wore this royal blue knee-high dress in the 1990s. The dress now stands next to one of Bob Dylan’s guitars under the grand staircase in the main lobby of the Hard Rock Hotel and Casino.

The Boss is still the boss from Long Branch, NJ

Bruce Sprinsteen wore this fire engine red and muscle bulging tank-top with a matching bandana (along with a shredded knee pair of jeans) that has returned to the current day streets, and before,  the East Street Band. This outfit has heard the song “Born in The U.S.A” quite a bit for its comfort and masculine mojo.

Many of the fashions on display pay homage to local artists from the tristate area. 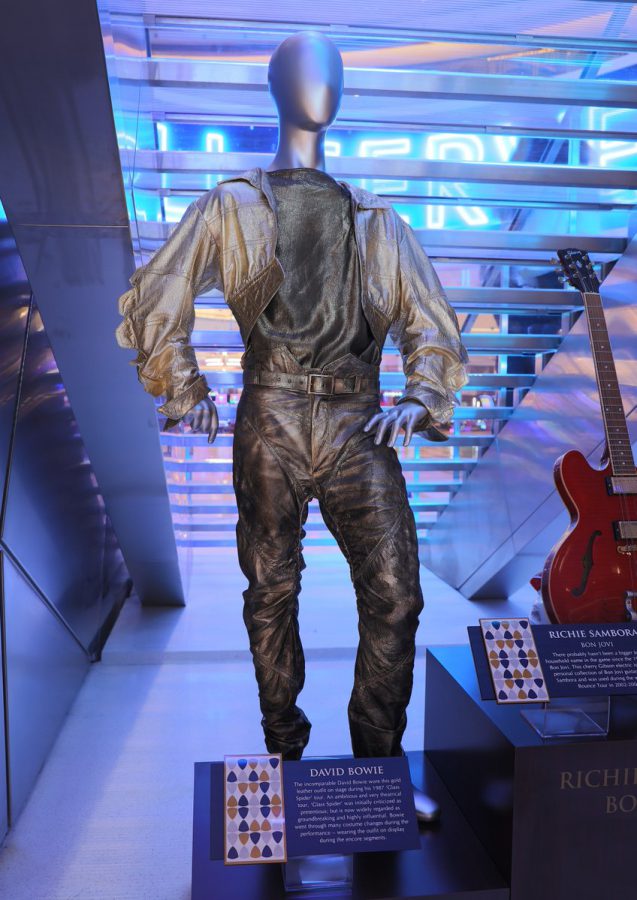 He came from Mars

From the man who gave us Ziggy Stardust, David Bowie wore this outfit as he shimmied and strutted on stage from England to the U.S. He performed in this outfit in the 1980s during his “Glass Spider” tour. The gold-tone, leather jumpsuit was his costume only during the encore if/when the audience encouraged him to perform one more song.

Gene Simmons from KISS wore this armored outfit on stage while wagging his long tongue, spitting up blood and playing bass in this costume in the 1970s. One of the first glam-rock bands of the era, Kiss became a household name due to their attire and pushing the envelope on fashion that lead up to the Goth style. His boots will eventually come back into fashion (think “King of Thrones”) but we’re not so sure about the faux armor. 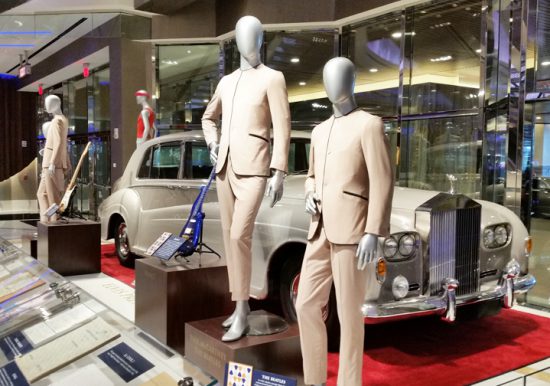 The Beatles before Ed Sullivan

Arriving in the U.S.A. This scrappy group of kids from Liverpool, England were named The Beatles by a slippery and sleazy manager. The outfits worn by Paul, George, Ringo and John now protect a classic car once owned by Elvis. Yes, we can identify them by first name but on the topic of clothing, their beige jackets with black piping and flood pants sing out a classic song for expert tailoring. 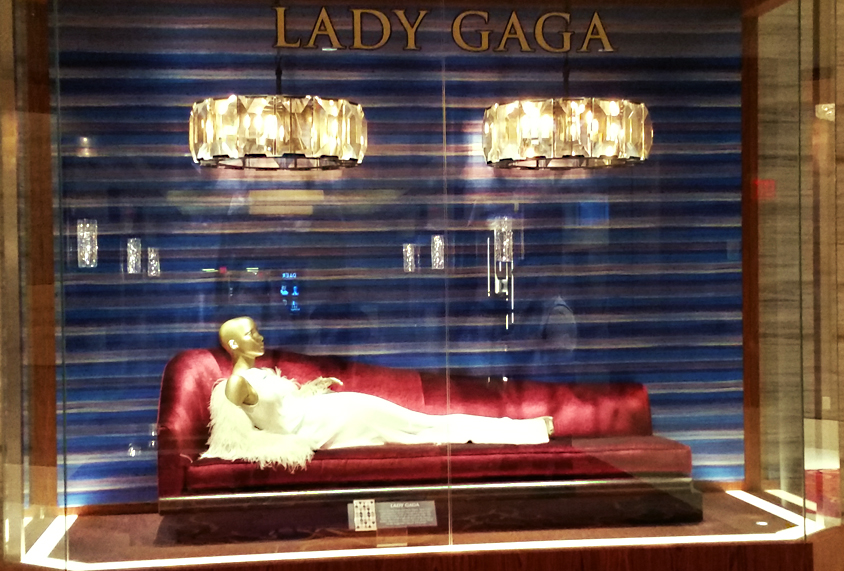 Today’s Goddess of music and fashion, Lady Gaga, is showcased as the centerpiece of the entire wardrobe collection. Here is one of The Lady’s more conservative and mature outfits made with a virginal, white silk, long length gown and matching faux ostrich plume boa. Many of her fashionista “little monsters” approve of the classic design and can’t wait for her to perform at The Hard Rock.

Amongst the high rollers, weekend revelers and ear piercing clash of a Zildjian Cymbal, is this wonderful display of clothing worn by some of the most infamous artists who performed and worked for a fickle, glorious and notriously smarmy music industry that built itself on a hard rock.

Make Up For Mom: Put A Smile on Her Face This Mother's Day
The Curly Games Part Two: Which Curly Hair Care Set Will Make It Out Of The Shower Alive?
Banish Stress with tanasi’s Healthy, Hemp-Derived CBD Products
Travel: In the Bag
Previous Article