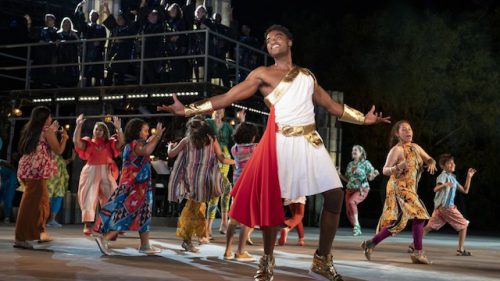 While the Delacorte Theater seats 1800 people, all of the tickets are FREE… yes, free. If you’re lucky enough to snag a ticket. A few lucky theater-philes can win tickets through the in-person lottery, which is drawn daily before the show. Starting at 5pm and ending at 7pm, you may enter the standby lottery for one or two tickets. Between 7pm and 7:30pm, names are drawn, and you just might be lucky enough to get in. 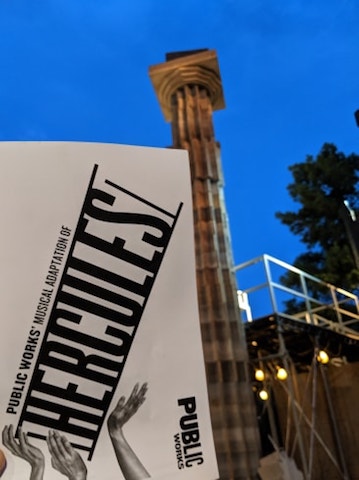 “Bless my soul- Herc was on a roll!” This production has an all-star cast that will have any Broadway fan buzzing: Jelani Alladin as Hercules, Krysta Rodrigues as Megara, Roger Bart as Hades, James Monroe Iglehart as Phil, and the list goes on. The leads were top notch- taking you on Herc’s journey “from zero to hero”. The costumes were fabulous and worthy of Mount Olympus – especially the muses- who had several costume changes, each one sassier than the next! Every good Greek story needs a Greek chorus and Broadway Inspirational Voices were glorious. The ensemble was comprised of all ages, all ethnicities, all sizes and all abilities. The dance numbers were brilliantly choreographed by Chase Brock and will have you jamming in your seats. There were some wonderful new songs by Disney alum Alan Menken and David Zippel and a new book by Kristoffer Diaz, full of laugh-out-loud moments. There was a dance troupe of men, a high school marching band, and a giant battling puppets (oh my). This is all put together through The Public’s initiative- Public Works: “Led by Founder Lear deBessonet and Director of Public Works Laurie Woolery, Public Works deliberately blurs the line between professional artists and community members, creating theater that is not only for the people, but by and of the people as well.” With over 200 participants, this impressive production will not disappoint.

Rumor has it that Disney is not planning to send this production to Broadway anytime soon, so it is unclear what is next for this fantastic show. Given how brilliantly it inspires a sense of community, hopefully it’ll be licensed for production throughout theaters and schools, especially now when we all could use a hero.

Hercules is currently playing at the Delacorte Theater in Central Park through September 8th. For more information, visit: https://publictheater.org/productions/season/1920/hercules/.

Geneva, Switzerland - It's More Than Just Chocolate and Fondue