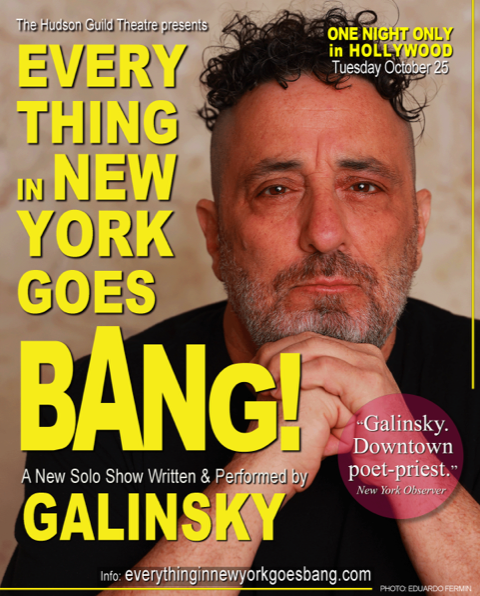 Everything In New York Goes BANG!, written and Performed by Robert Galinsky, will be presented for one night only in Los Angeles. Following the successful launch of the national college tour kickoff of his acclaimed solo show The Bench, A Homeless Love Story , Galinsky premieres his newest solo show as a one-night-only debut engagement. Executive-produced by TONY Award winning producer Terry Schnuck, this much-anticipated-one-person show recounts Galinsky’s journey from childhood in the suburbs of Connecticut, through his interactions with hipsters in the Lower East Side of New York City, to his work with young people incarcerated in Rikers Island. As always, expertly embodying multiple characters through storytelling and rock-star level poetry, he explores the
harmony and turmoil of living in NYC from his arrival in the late 1980’s to his exile and banishment from the notorious Rikers Island jail in 2022.
____________ 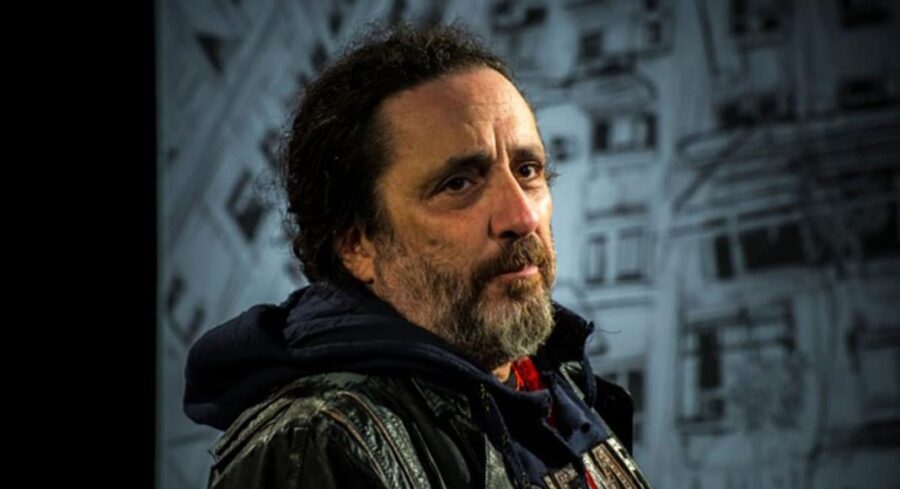 Some background on Galinsky:
– An acclaimed actor, poet, and coach, he was most recently honored to perform his poem East Village Hip at the Whitney Biennial 2022, where it now resides in the permanent collection.
– He will be seen in his first ever appearance on “Law and Order” this October (“Benefit of the Doubt” episode 6, season 22.)
– He is currently working with the Tamiment-Wagner Collections, NYU Special Collections, to research and develop a theater piece based on what William Kunstler called: “The Annoyance Project” (“This is New York, and there’s no law against being annoying.” — William Kunstler.)
– His solo show The Bench, A Homeless Love Story (Directed by Jay O. Sanders) debuted Off Broadway at NYC’s The Cherry Lane Theatre and had an extended run in Hollywood at the Hudson Guild Theatre.
– The Bench was also staged or multiple charity benefit shows in Los Angeles, with renowned actors lending their talents, including: Barry “Shabaka” Henley, Lin Shaye, Gary Cole, Laura San Giacomo, Josh Peck, Chad Morgan and Monique Coleman.
— His first book of poetry “Scribbling on Spaghetti” is available on Amazon and in NYC bookstores.
– Galinsky hosts a monthly series called “Poetry in New York” in the Lower East Side’s most intriguing book store, Book Club Bar.
– He is laudedfor his work as head speaker coach of TEDxTeen (for over a decade) as well as for his unique ability to engage incarcerated and imprisoned youth with literacy, writing, and theatre – while also successfully applying the same methodologies to CEOs, lawyers, professional athletes, and scientists.
– Notable clients include: 50 Cent (actor, hip hop artist), Edgerrin James (Hall of Fame football player), Kambiz Shekdar (AIDS scientist), Brooklyn Bar Association, TEDxFultonStreet, and TEDxYouth.
____________

Some media kudos:
“Galinsky’s ‘BANG!’ is touching, sweet, grungy, and saturated with humor. The word play has a
musicality to it that is likened to the beat poets of the ’50s and at times, dips into the coolness and
complexity of a Charlie Parker bebop jazz piece.” — Mark Schoenfeld, Creator of “Brooklyn the Musical”

Don’t miss this! One night only.

Antidote: Chocolate That Loves You Back

Screening: The Bench Play on December 5th in the West Village

“The Bench” Play is Where It’s At