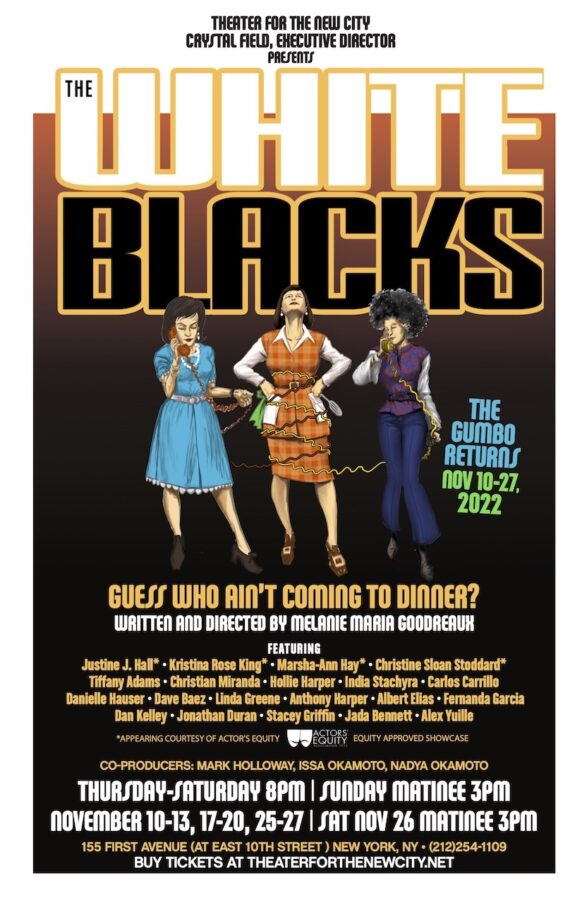 This past Friday, I attended an affecting production of Melanie Maria Goodreaux’s play, The White Blacks, at Theater for the New City. Going into the play, I knew very little, aside from the fact that the playwright took inspiration from her family history. In The White Blacks, Goodreaux expertly weaves elements from her past to tell complicated, yet timely stories anchored with a truth that can only come from writing what you know.

Two of Goodreaux’s aunts on her mother’s side were born “light-skinned” enough that they could “pass for white.” And pass for white they did. Their light skin afforded them privileges they couldn’t ignore in a racist world: better-paying jobs, opportunities, and acceptance in white society. But all of this came at a price. To keep up the charade and reap the benefits of “passing as white,” Goodreaux’s aunts had to sever most contact with their Black family members. The plot centers on the two “light-skinned” Southern “Creole” women who fled their New Orleans family home in the 1940s to pretend to be white, and the Black family members they left behind.

I was regularly confronted (in a jarring way) by the bleak reality of white supremacy, and how I have benefited from it since birth. The play illustrated the ways such an insidiously pervasive social construct poisons even the very groups of people it oppresses.

The show’s heart, memorable acting performances, and attention to detail helped pepper the stories with much-needed moments of levity. Human lips popping out of a portrait hanging in the family room of Mamair’s home had the crowd howling regularly.

This production of The White Blacks comes nearly three years after its initial run, which, despite great success, was stalled due to COVID. You can still catch four more shows this weekend at Theater for the New City: one on Friday, November 25th, two on Saturday, November 26th, and one on Sunday, November 27th. Get tickets HERE. P.S. Word on the street is that an extension is imminent.