In college I had a friend who couldn’t refrain from porny puns, renaming things, just about everything, with erotic innuendo. The sexual spoonerism was non-stop. Every hyped watering hole was a spankeasy (instead of a speakeasy). At the local Thai joint, he worried the Red Curry Dick wasn’t big enough for us share, and would ask “Am I the only one who thinks Forest Hump is so overfellated?” During his more chaste, academic moments, he was always late for class, rushing off to Comparative Cliterature 169. He claimed to have a very specific form of Tourettes. I think he was just a disciple of cheeky, sex positivity before it was mainstream.

After a few disciplinary actions coz of such licks of the tongue, we lost touch. (Cancel culture, anyone?) I still think about him all the time. So when the Museum of Sex launched their new “ 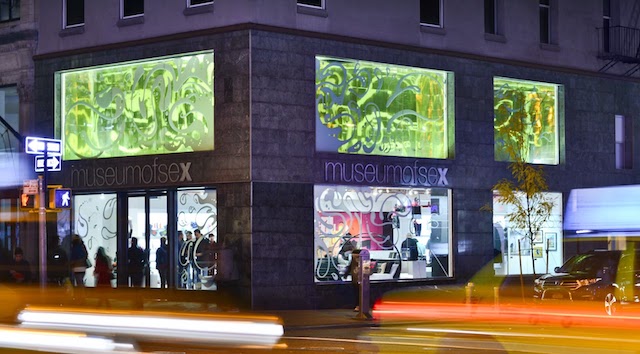 That morning I slipped into my most appropriately-themed lingerie and heels in anticipation of a bawdy evening. On the way, it dawned on me: Did I really want to be a divorcée sipping genitalia-themed cocktails in a sex-themed bar all by my lonesome? I did what all city girls do – I depended on the kindness of strangers. On the walk from the subway, it was finally my turn to cat-call relatively attractive male pedestrians. “Hey Sir, want free booze?” The fifth guy shrugged, “It’s 5:30 somewhere” in the rote pentameter of barflies everywhere. It was actually 6:30. He didn’t ask where we’d be drinking and I didn’t ruin the surprise. 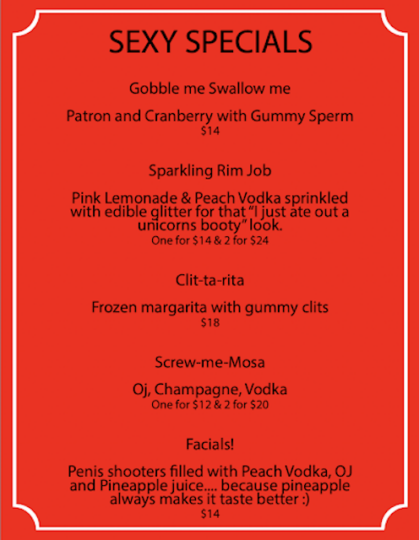 By the time we arrived at the Museum of Sex Carnal Carnival Bar, the beverage director had arranged to have a few of the samplings ready stat. I asked my lush companion if he’d like to start with a Rim Job or a Facial. He said he’d never had a facial before. I knew he meant the other kind, the one with lavender steam and hydrating serum, but it was the right answer. Time to pop that cherry for us both. “Would you prefer black or white?” The curly-haired mixologist asked if I had a preference for the color of the phallus-shaped container. I looked at my guest, and she nodded in a tacit agreement to put him at ease. 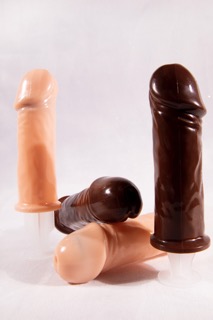 In the spirit of inclusion the Museum of Sex fosters, the vodka shot arrived in a peachy, circumcised push pop that could make many complexion of phalluses feel seen. I worried there wouldn’t be enough to share. How much libation could a lone lingam hold? I almost ordered a second one. We soon discovered, that just like the real thing, there was a lot in there, more than meets the eye. I let my date do the honors first. He took a dainty shot, squirting in his mouth, then two full ones. Because he was a gentleman, he squirted one in mine and apologized for making a mess of me. The peach-infused vodka blended with pineapple juice, in a nod to culinary urban lore, was quite tasty, so much so that I didn’t mind the dribbles. And then because I’m a lady, I returned the favor. 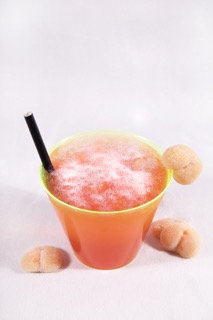 Four shots later, we were ready for our Rim Jobs. It’s a sparkling cocktail, not due to the addition of prosecco, but to the generous sprinkling of edible glitter, what one might source from a unicorn’s nether regions, mixed with peachy vodka, and an ever sweeter accompaniment, booty-shaped jelly candies. My ersatz date’s lip glittered like a disco ball as he buzzed “Another round of both.” With the second Facial Penis Shooter, we repeated the his-and-her squirting in a mutual exchange that would have warmed the hearts of couples therapists everywhere. Then, while I was photographing the Pole Star, a stripper pole-based karaoke game, and the LICKER cabinet, he hogged all the candy. I couldn’t blame him though. The ass cheeks were so plump and sweet, as they should be, he couldn’t resist licking and gobbling mine down too. 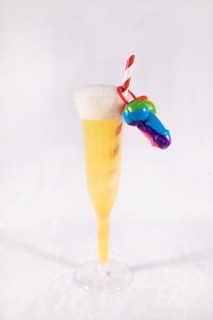 Deep in the Super Funland rabbit hole, we contemplated entering the Kaleidoscope booby slide but the next round of kinky cocktails was already calling our names. The Screw-me-Mosa topped with an anatomically complete, rainbow flag penis ring-pop cemented the Museum of Sex’s dedication to sexual inclusion and fun for the sake of pure, giddy fun. It’s like Pride Weekend in a glass. 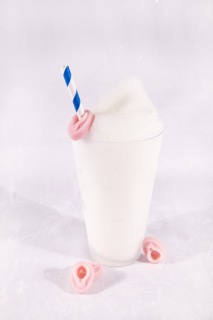 And finally the pièce de résistance arrived, the Clit-ta-rita. My long-lost friend would have been proud that such a cocktail exists and was passing my lips, though not without his presence. Its lime juice, triple sec, and tequila blend is of the frozen variety to offset the combustible, if correctly-handled, garnishes: not one but two clitoris candies. My companion stared at them, tilted his head, “Those aren’t sea shells, right?” He nibbled and chomped on both to the point of mutual satiety. I was proud of him and thankful for the Museum of Sex. If mixology as sex education is the new frontier, it’s time to start a franchise.

The beverage manager invited us to sample the non-novelty offerings, a selection of pre-mixed canned cocktails, mules, mojitos, and daiquiris, which were stored in the LICKER cabinet. After two Rim Jobs, two Facials, a Screw-me-Mosa and a Clit-ta-rita, I was spent. My date was hungry, “Wanna soak it up at Shake Shack?” I gasped, “The place with burgers?” disappointed that he’d failed to finger the rubrics of naughty wordplay. On the way out, we stopped at the RuPaul Fortune Teller Booth. What guidance, what clairvoyance, would the drag diva of all divas dispense? Just as my hand hovered above the button, I changed my mind. I could already see the future. My evening companion was just that, it wasn’t meant to be. And more importantly, I envisioned my sorely missed friend sliding up to a bar, trying his best takes at yoni and phallus-themed cocktails names, only to be rebuffed, kicked out and cut off because a bawdy, yet safe, evening of imbibing Facials, Rim Jobs, Screw-me-Mosas and Clit-ta-ritas can only be had at the Museum of Sex.