BeautyNewsNYC was lucky enough to get to ask Matt de Rogatis from Ruth Stage’s production of Cat On a Hot Tin Roof some questions. 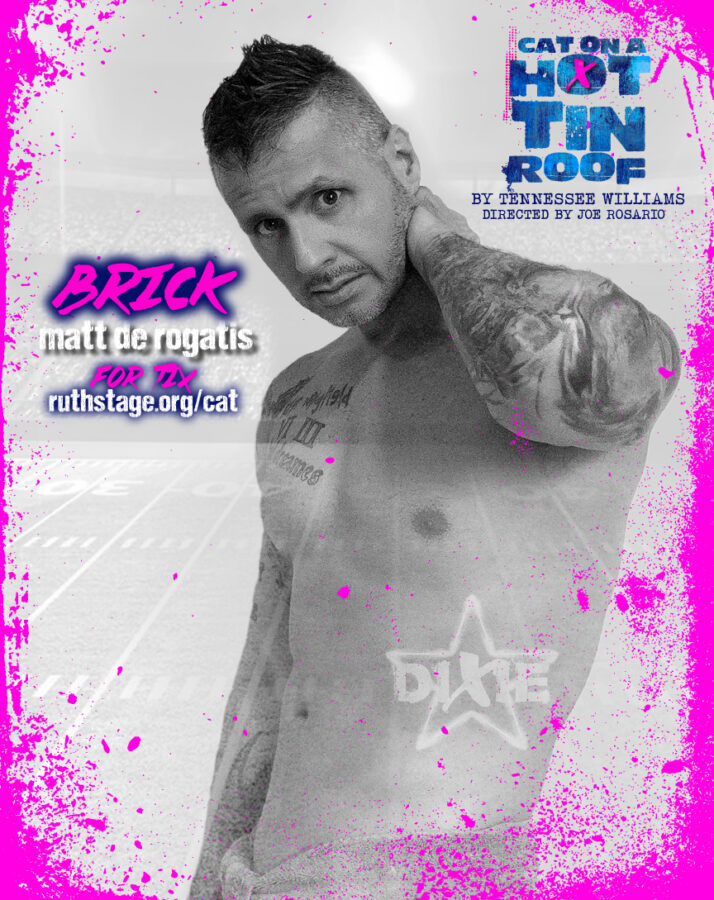 Tell me about yourself:

Oh well, that’s a pretty broad question, but I’ll be as concise as possible. I come from an Italian American family, so eating and cooking are definitely big parts of my life. As per the latter, my signature dish is eggplant parm, chicken parm, and shrimp parm, with everything served as one entree. I call it….Parmageddon. I’m also big into psychology and am currently getting my master’s degree in that. I love sports, and I love the beach. I pretty much split my time these days between Asbury Park, NJ, as well as Miami and Orlando. I also love tattoos and would say I’ve got about 20 of them. And skulls too. Love skulls. Oh, and I love me some old-school professional wrestling.

How did you first get involved in the theatre?

This is one of those cheesy answers where I’ll say there was just always something inside of me pointing me in this direction. I actually didn’t get started acting until I was 25 years old and went on an audition for a play called The Mousetrap at a small community theater in Freehold, NJ. The director of that production was a man named Bob Lamb, who became a mentor, best friend, and sort of a third parent to me. We formed a friendship that spanned many years. He taught me so much about acting and producing, and being around him gave me a lot of the tools I needed to go out and find success today. Sadly, he passed in 2019, but there’s never a moment that I’m not thinking about him and all he did for me. I know he is always watching over me. He is my Obi Wan Kenobi.

Can you describe your experience with The Ruth Stage production of Cat On A Hot Tin Roof?

This has been an exhausting ride but exhilarating at the same time. The production was supposed to happen years ago and has been postponed five times due to Covid. While disappointing – especially our most recent January cancelation – each postponement has been a blessing in disguise. Directors have changed, group members have changed, some cast members have changed, and theaters have changed. And yet, somehow, the show kept getting stronger every time we had to push it back. I think that’s a testament to our will. Another group may have just said $%&* it and moved on. But we just kept riding out the storm and persevered, and now on Friday, we finally get the chance to put the show on that we have been working on since November of 2019. Goonies never say die.

How does it feel to be bringing Brick to life finally?

I’ve been living with this guy for like two years. I feel like he is embedded into me. I can just flip a switch at this point and bring him out. It’s a very exhausting role, physically and emotionally. I’ve played The Elephant Man and Richard III; both roles were very physical. However, this role seems to be a little more physical – hobbling around on a crutch in one hand and drinking whiskey all night in another. There are a lot of falls and fights and emotional energy being expended. I’m shot some days after rehearsal. Christian Jules Le Blanc, who plays Big Daddy, just beats me up all night. Just kidding! He’s wonderful on stage and off. Ultimately though, I feel like this is the best work I’ve ever done, and that’s always the goal. To keep growing and challenging myself and getting better.

What has been your favorite memory during the creative process for Cat On A Hot Tin Roof?

Without a doubt, it’s been working with our director Joe Rosario and Spencer Scott, who plays Gooper. The three of us have literally been going nonstop for years now doing the work of 40 people. There is NEVER a day when there isn’t something going on, or we aren’t talking. We even started our own podcast, Ruth Stage After Dark, to sort of track this whole ridiculous process of trying to mount a show during Covid times. There’s been a lot of ups and downs, of course. I mean, that’s life. But having those two guys alongside me helping to steer this ship into the port is without question the highlight of the creative process for this production. We are really hands-on at Ruth Stage. From marketing to casting to fundraising and basically everything in between, it’s the three of us, for the most part, bringing this to life behind the scenes. Naturally, countless memories have been made. And I have to shout out the 4th man, Lou Gutowski, who designs all of our graphics and website. He is the unsung hero of the group.

What would you say to someone who thought theatre wasn’t for them?

I mean, I’d say to them try it, ya know? How can you know something is not for you if you have never tried it? I didn’t think I’d like eating snails, but they actually taste pretty good. If you have tried theater, though, and didn’t like it – well, maybe that just wasn’t the right production for you. Honestly, I had a hard time enjoying theater for years – even while I was acting. But then I saw a wonderful production of Our Town in Red Bank, NJ, at Two River Theater years ago and realized I just hadn’t seen the right stuff that appealed to me. I think there is something for everyone with Cat on a Hot Tin Roof. Literally. We have beautiful women in the cast, like the incredible Alison Fraser, and very solid acting. It’s a new take on a classic, with funny bits featuring kids, original EDM music by Ben Levine, incredible writing by Tennessee Williams, and a Broadway-caliber set by Matt Imhoff. It’s an edgy production. I could go on. I think this is going to be a fascinating night in the theater. Not to mention, a show like Cat on a Hot Tin Roof only comes around once every so often. It may not be back in NYC for another ten years. This is a chance to see one of the greatest plays ever written in the mecca of theater. We hope to be able to introduce this play to a whole new generation of people.

What do you want audiences to walk away with after experiencing Cat On A Hot Tin Roof?

I want them to feel like they just saw a new play. And, of course, I want them to be wondering about Brick as they leave the theater. Is he? Or isn’t he? Grab a ticket and draw your own conclusions! THIS is the place to get ’em. The Theater at St. Clement’s is the place to be starting this Friday, July 15th!

Hear His Music? See His Wardrobe!