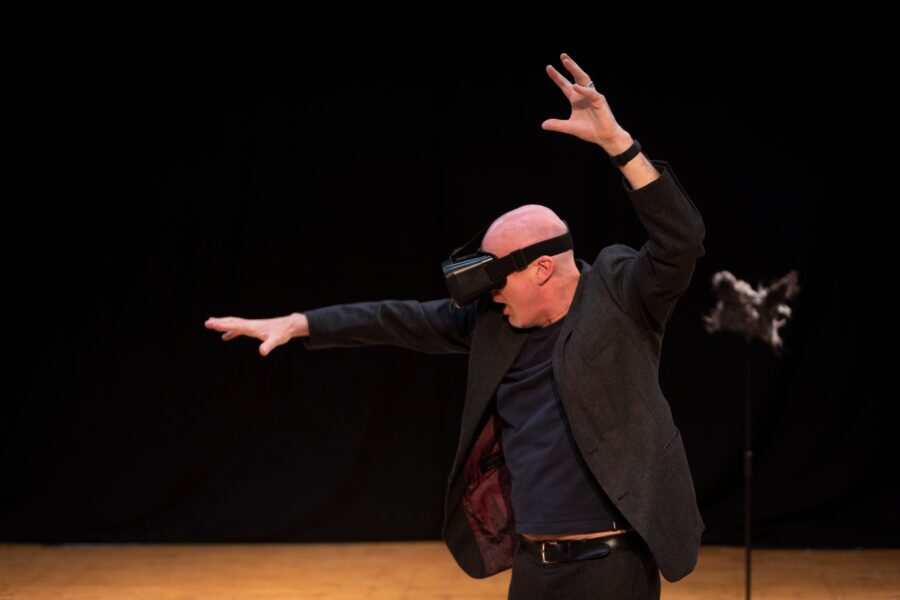 BeautyNewsNYC got the opportunity to pick Tim Crouch’s brain about his background, his thoughts on theatre, and his play, Truth’s a Dog Must to Kennel. Performances begin at SoHo Playhouse as part of The Fringe Encore Series on December 28th.

Tell us a little about yourself and how you got into theater as a writer and performer.

I’ve been acting since the beginning of time. I was a hothead in my twenties, raging against the mainstream, performing work with a collective of radical theatre-makers in the South West of England, trying to change the world. Then I went to drama school in London, settled down, and pretended to be a proper actor for a few years. I hated it. So I started to write for myself, and I’ve been writing ever since. Still trying to change the world.
My first play, My Arm, played 59E59 Theaters and then came back to the Public Theater in 2006. My second play, An Oak Tree, won an Obie for its run at Barrow Street Theater in 2007. Truth’s a Dog Must to Kennel is the eighth play I’ve brought to the US. It’s good to be back with something new.

Can you provide some background on Truth’s a Dog Must to Kennel?

Truth’s a Dog started from thoughts about the Fool in Shakespeare’s King Lear (the title is one of his lines). The Fool is an odd figure. In modern terms, he’s a comedian, a satirist. But he leaves the play before the interval. He’s there one minute, gone the next – with no explanation. The world of King Lear is pretty messed up – greed, division, violence, contested leadership, contested truths, civil strife (sound familiar?) The Fool leaves that world, and I’m sort of not surprised. I think I’d do the same thing. He also leaves the theatre – walks out before the play is over. And he’s not the only one. In the last few years, a lot of people have left the theatre – actors, playwrights, technicians, and audiences. And theatre has almost left us.

Truth’s a Dog Must to Kennel is about the act of leaving. Leaving a world that’s hard to live in and leaving an art form that’s on its knees.
It’s also about comedy. A comedy about comedy – and about the failure of satire to fundamentally make any difference to the state we’re in.

How was your experience with the Edinburgh Fringe Festival?

It was my ninth Fringe, but this one felt different. In 2020 the Fringe was canceled. In 2021 there was a ghost fringe. 2022 was billed as a great return! We all worked so hard to bring it back to its past glory, but something felt wrong. I don’t think we were ready to celebrate yet. I don’t think the world has recovered. The joy and exuberance of Fringe 2022 felt a little unearned.
Despite that, Edinburgh is still the only place to be in August! The largest arts festival in the world. Three thousand shows, late nights, new friends, careers made, names made, money made, more money lost. It’s an intoxicating mix, and 2022 was no exception. I was lucky to have a major theatre on my side – the Lyceum, Scotland’s leading producing theatre. They commissioned and produced Truth’s a Dog and gave me a beautiful space to open it in. The play is a thoughtful one, and I was delighted to see it land so successfully with critics and the audience.

How do you define the role of an audience in theatre? What role do you see for them in this production?

The audience is the ultimate collaborator. A play is nothing without them. I say that Truth’s a Dog Must to Kennel is an act of ‘collective imagining, but I think every play is this. That’s how theatre is different from film or television. It needs its audience.
I write plays with a sense of a live gathering. A sense of people in a room together – not some people in the light and some people in the dark. Not some people in front of a screen. We are all in a theatre together, and the audience brings a vital interpretative role to the event.

How did COVID influence your creative process when writing Truth’s a Dog Must to Kennel?

In lockdown, some people wrote novels, painted masterpieces, and learned languages. For me, I struggled to connect one thought with another. I struggled to make sense of what was happening around me. Truth’s a Dog Must to Kennel is the result of that struggle.

During lockdown, I made a piece of digital theatre, I watched digital theatre, I watched streamed performances, I performed on Zoom, I was an audience on Zoom, and I lived on Zoom. I felt threatened by the encroaching digitalization of theatre. The choice between either shutting up shop completely or working online felt too binary. For some of Truth’s a Dog, I wear a VR headset in a response to the digital trend. Live theatre is collective. I was disheartened by all our isolated souls peering into and out of screens. I use the image of VR to explore that isolation. My play is wholly analog. Wholly human.

What would you say to someone who thought theatre wasn’t for them?

Come see a Tim Crouch play! They’re really not like other plays. (All plays shouldn’t be like other plays.) I understand why an audience would wonder why they should bother with theatre if it only ever mimics TV. My plays are uniquely theatrical. They exist in the moment and celebrate the moment. They do something that films and television can’t do. They respect their audience. They are not childish or fantastical. They contain multitudes. They work inside the brain and the body.  They require presence. Be present.

What do you want audiences to walk away with after experiencing Truth’s a Dog Must to Kennel?

I want an audience to feel acknowledged, respected, and loved. Truth’s a Dog Must to Kennel is not a walk in the park. It asks some big questions. But I think it does so respectfully and imaginatively – and with big laughs. I want the audience to think about new ways that stories can be told.

For Brows That Wow

In “Yeah, But Not Right Now,” A.J. Holmes Owns Up to His Past