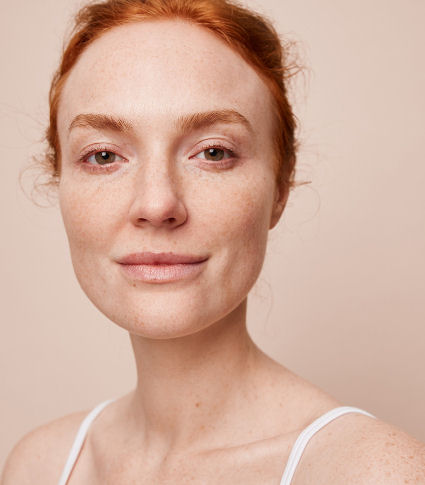 Rosacea is a skin condition that affects 16 million Americans, mostly fair skinned women over the age of 30, and is generally concentrated in the cheek and nose area. In its mildest form it’s characterized by an overall flushing and blushing due to visible blood vessels. In more severe flare-ups, acne symptoms appear and in its harshest cases, the skin swells from fluid retention, and there is thickening of the skin along with redness.

What causes it, how can it be prevented, and how can flare-ups be kept under control are the biggest questions. To answer them, I consulted three experts, a dermatologist, a pharmacist and an esthetician.

All the professionals speak about the Demodex mites, which are microscopic mites that live in our hair follicles – not just the hair on our head – but on the tiny, barely there facial hair. We all have Demodex mites, but those with rosacea have an abundance of them, and studies show that rosacea sufferers can often have about 15 times the number of Demodex mites than those with healthy skin.

New York City Dermatologist Dr. Whitney Bowe says that rosacea is one of the most undiagnosed conditions in her field of dermatology, and many suffer from it thinking they have “sensitive skin, red/blotchy skin, eczema or breakouts” and often don’t seek help as they don’t know whom to turn to, and they end up going to “Dr. Google”, which only leads to more misinformation, suffering and frustration. Dr. Bowe says it’s a multifactorial condition, which means it can include your genetics, your environment and your daily habits, and needs to be treated with both an inside and outside approach. Topical creams alone won’t do the trick.

Pharmacist, nutritionist & skin health chemist, Ben Fuchs believes that rosacea is caused by a disturbance in the internal chemistry. He says that it’s an inflammatory condition caused by intolerance to certain foods and alcohol. Also, Fuchs says that rosacea is associated with comorbidity, which means that people that suffer from it, will often also be at risk for other issues such as asthma, allergies, autoimmunity and GI (gastrointestinal) disturbances.

Medical Esthetician Holly Cutler agrees that rosacea needs to be treated internally and externally and her clinic does a lot of lasers and peels to help reduce redness and inflammation.

All the experts agree that rosacea should be treated both internally and topically. Diet plays a critical factor and there are trigger foods that can cause a flare up. Typical trigger foods are heavily spiced foods as well as alcoholic beverages. Hot beverages and heavy exercise can also trigger a flare up but we have to be realistic and moderate, as Dr. Bowe says, “I can’t imagine telling my patients to live life without a cup of joe, the occasional Mexican dinner, or glass of red wine. And I’m also not a fan of telling patients to stop exercising – there are way too many benefits which clearly outweigh the risks for overall health.” Fuchs suggests fasting for a day or two (okay to drink green or chamomile tea) and then keeping track of everything you add back into your diet to determine your trigger foods. He also suggests eating fermented foods which increase the good bacteria in our gut. These include probiotic yogurt, kefir, kombucha, sauerkraut, pickles, miso, kimchi and others. Additionally, Fuchs recommends eating pineapple, kiwi-fruit, and papaya which are rich in enzymes as well as drinking green tea which contains anti-oxidants and is anti-inflammatory. Cutler recommends learning what your trigger foods are by “Getting a food sensitivity panel and gut panel performed by a qualified naturopathic physician”.

Topical Remedies…
There is no magic cream, or topical medication that will either cure rosacea, or make its symptoms disappear, yet there are some things that can be done to ease discomfort and some of the redness. However, they don’t negate going to a professional to get a real treatment plan. For at-home DIY treatments, try making a cool compress from green tea, or make a mask using colloidal oatmeal and keep it on for 10-20 minutes and then gently wash off. Some “off label” items include using Visine on the skin to take away redness, as well as Preparation H to help with inflammation. (This is an old beauty pageant contestant trick) And if you’re having an acne breakout, apply Aspercreme on it – it’s anti-inflammatory and will relieve pain and inflammation. Fuchs recommends using a topical vitamin C serum, but it must be fat soluble – hence, not Ascorbic acid, instead if should be tetrahexydecyl ascorbate, and Bowe recommends using products with hyaluronic acid and ceramides at home, and says that “many of her patients respond beautifully to laser treatments and gentle salicylic acid chemical peels which calm inflammation.” Cutler says, “Home regimen should include gentle exfoliation with enzymes, combined with topical anti-microbials, anti-inflammatories, Vitamin C, niacinamide, azelaic acid, and chemical free sunblocks.”

Bottom line…
The cause of rosacea is a combination of genetics, hormones and gut health. The best treatments to keep flare-ups under control are a combination of eating the right foods while avoiding trigger foods, over exposure to the sun, (wear that sunscreen!), over heating due to over exercising. Listening to your body and being keenly aware of what triggers your outbreaks is also key to avoiding flare-ups.