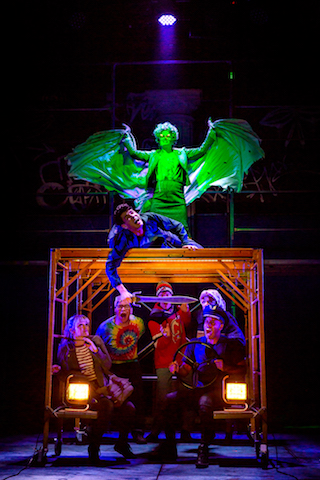 TheaterWorksUSA and Martian Entertainment are thrilled to bring The Lightning Thief: The Percy Jackson Musical, the original musical adaption of Rick Riordan’s New York Times best-selling novel, to Broadway. Now playing through January 5th at the Longacre Theatre on 48th and Broadway, the limited run-engagement follows the recent successful conclusion of its 32-city North American First National Tour. My daughter (age 9), son (age 11) and I thoroughly enjoyed this production and we all highly recommend it.

As a son of Poseidon, Percy Jackson has newly discovered powers he can’t control, monsters on his trail, and is on a quest to find Zeus’ lightning bolt to prevent a war between the Greek gods. Featuring a thrilling original rock score, with an onstage company of seven playing more than 47 characters, The Lightning Thief is an action-packed theatrical adventure about accepting that normal is a myth and embracing the superpowers inside all of us. 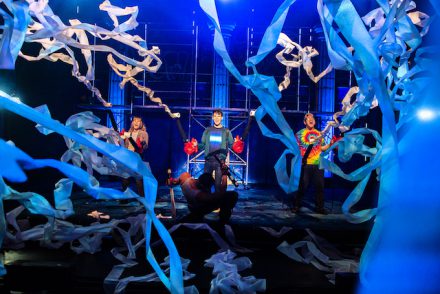 This fast-paced, innovative musical has a running time of 2 hours 10 minutes including intermission. The show was exciting, creative and engaging from start to finish and would appeal to a wide range of ages and musical tastes. Having read the Percy Jackson books, my son prepped me and my daughter with some plot points but the creative staging, sets, costumes and dynamic performances will capture the attention of all theater-goers – no previous experience with Percy, Harry or the like necessary! 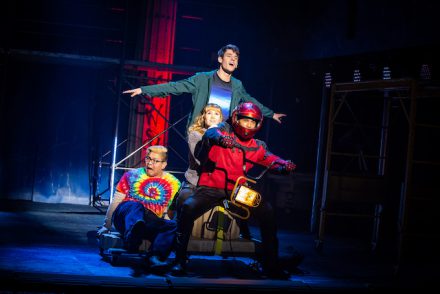 The Lightning Thief has a book by Joe Tracz (Netflix’s A Series of Unfortunate Events, Be More Chill), music and lyrics by Rob Rokicki (Broadway debut), and is directed by Stephen Brackett (A Strange Loop, Fall Springs, Be More Chill), with choreography by Patrick McCollum (The Band’s Visit). For reasonably priced tickets visit the TodayTix app or www.lightningthiefmusical.com. Enjoy!