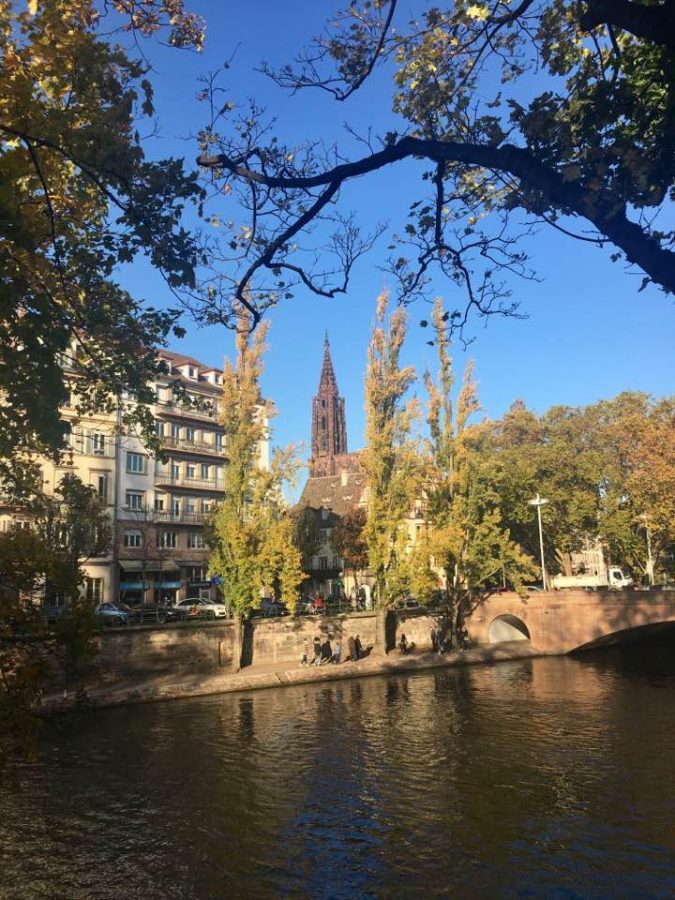 An exquisite mix of medieval old streets, 19th-century wide boulevards, and innovative architecture, Strasbourg is a must-see on your European vacation this summer. Its jewel-like historic centre, the Grande Ile was classified a World Heritage site by UNESCO in 1988, the first time an entire city centre received such a recognition. At the crossroads of Europe, Strasbourg is the capital of Alsace, the border region that was tossed back and forth between France and Germany for several centuries. Known for its gastronomy, Flammekueche and Choucroute, as well as fine wines, it is also rich with one of Europe’s most intriguing histories. 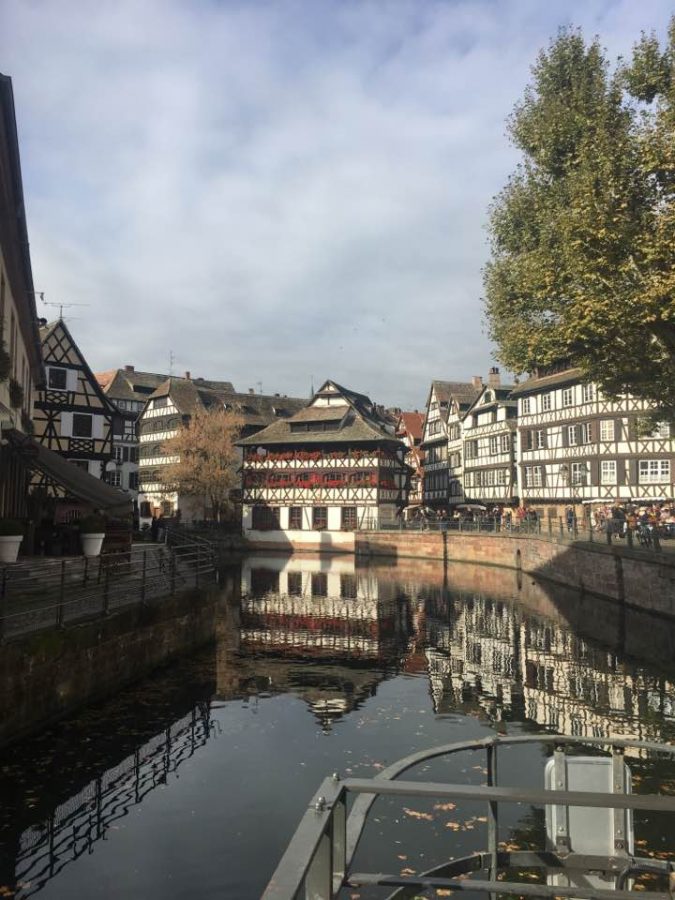 A former “Free City” in Charlemagne’s Holy Roman Empire, it hosted the famous Oaths of Strasbourg in 842, the oldest known document written in French, German, and Latin. One of Europe’s most important cities in the Renaissance, it was Gutenberg’s home as he invented the first printing press characters and it was also one of the early cities to adopt the Reformation after 1517. 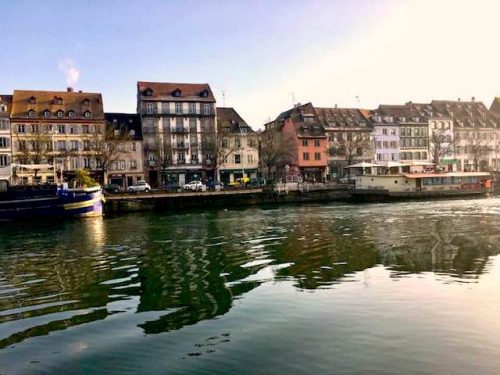 Known for its free press, it was also the home of the world’s first newspaper in 1625. More than ever today, at the cross-roads of Europe, the city characterizes itself as a vivid multicultural community that hosts the European Parliament and the European Court of Human Rights.

A “sublimely towering, wide-spreading tree of God” according to Goethe, Notre Dame de Strasbourg is a gothic cathedral just a year over her 1000th anniversary. Built in pink sandstone, it was at 466 feet the world’s tallest building from 1647 to 1874. Today still the sixth-tallest church in the world, it is considered one of the Middle Ages’  architectural wonders. 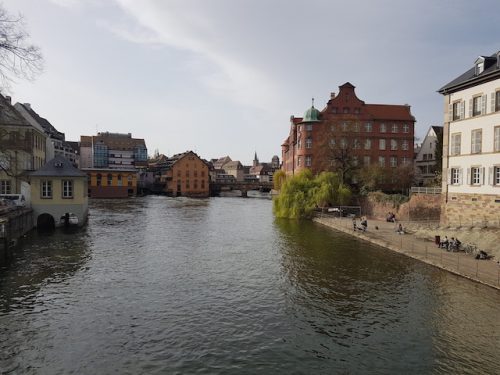 On a warm summer night, there is nothing as romantic as a walk in the Petite France quarter with its half-timbered houses, stone streets, water locks on the Ill River and old fashioned inns. No street is alike, no building is quite symmetrical to the next. Just let yourself unwind through the charming millennial paths and take note on your way of the imposing door frames, wooden corniches, and hanging shop signs that do not seem to have been changed often since 1500. 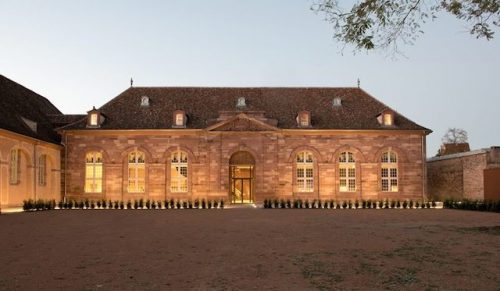 For a place to stay, several hotels offer very comfortable accommodations, but if you are looking for a truly one-of-a-kind, picturesque setting, The Haras hotel is the one you need to visit. 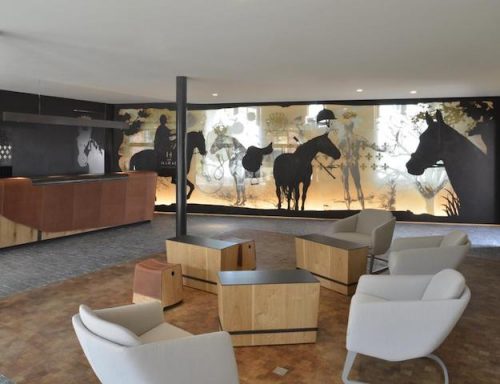 At a walking distance from the charming Petite France and the medieval Ponts Couverts ramparts, the 4-star boutique hotel occupies a 18th-century former royal stable complex. The former home of the Municipal Horseback Riding Academy in 1752, it was converted later into the Royal Haras by the Marquis d’ Argenson. Parts of the original structure such as the facades, roofs, front door, and stables are registered as historical landmarks. Designed by Patrick Jouin and Sanjit Manku, the mix of stable wooden elements and luxury contemporary accents offer a unique environment to savor in Strasbourg’s historical center. 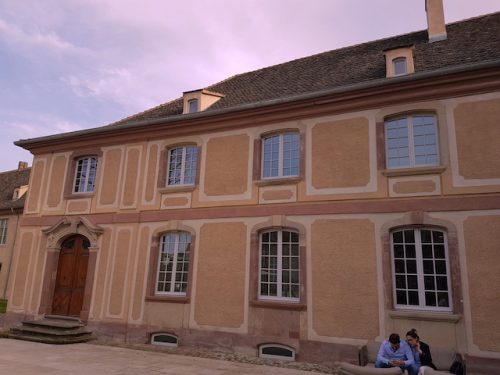 A peaceful garden allows you to enjoy quiet moments in summer, while the lobby, with its stunning graphic mural by Nathalie Falck, offers a lovely setting anytime of the year. 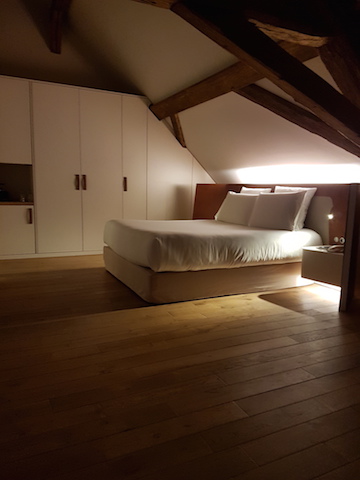 My Authentique room under the roof on the top floor was extremely well-appointed with its ceiling criss-crossed by an intricate web of beams that seem to have been left in the rough, as when they were used to buttress the stable’s roof. However, a closer look revealed that the wood has been refurbished and polished to sync perfectly with the luxury standards of the hotel. 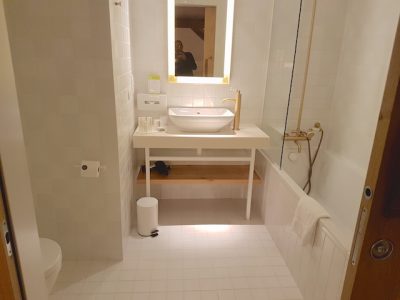 I loved the minimalist tone of fine, custom-made furniture on wooden floors. Leather accents on the bed and closets further individualized the charming setting, imparting a novel twist to the mix of old and new that makes this environment so unique. The large bed’s mattress was extremely firm and comfortable and the soft sheets were hard to pull away in the morning. A desk under the slanted roofs by a window offered a nice area to write quietly next to a leather couch with a small table.The bathroom was contemporary and spotless with many luxury amenities to enjoy. Bathrobes are available as well as slippers, a safe, a mini-bar and electric kettle to make tea. After a relaxing bath, peep out of the window and catch sight of the courtyard and time worn roofs of the historical abodes nearby. You are in a different world here. 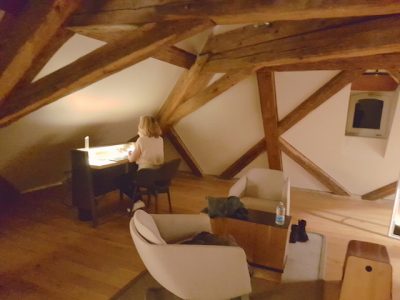 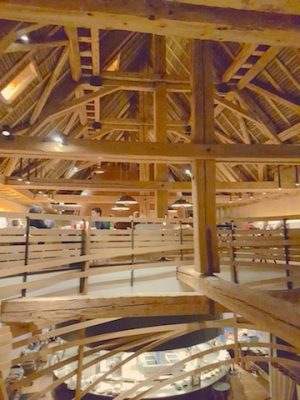 At night, dine at the restaurant, Brasserie Les Haras, in the adjacent building. It serves Alsatian classics in a convivial environment with the same stunning architectural touches seen in the hotel. Have a look at the majestic staircase with its intertwined wooden planks that seem to have been twisted like wreaths of yarn to create a most unusual axis to walk you from one floor to another. 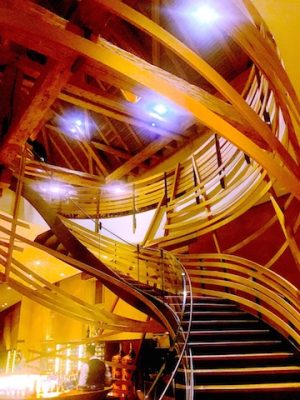 If you are looking for dreamy environments rich in eccentric details and authentic touches of the past, this stylish hotel will appeal to you. The staff is very polite and able to offer information in an efficient and affable manner. 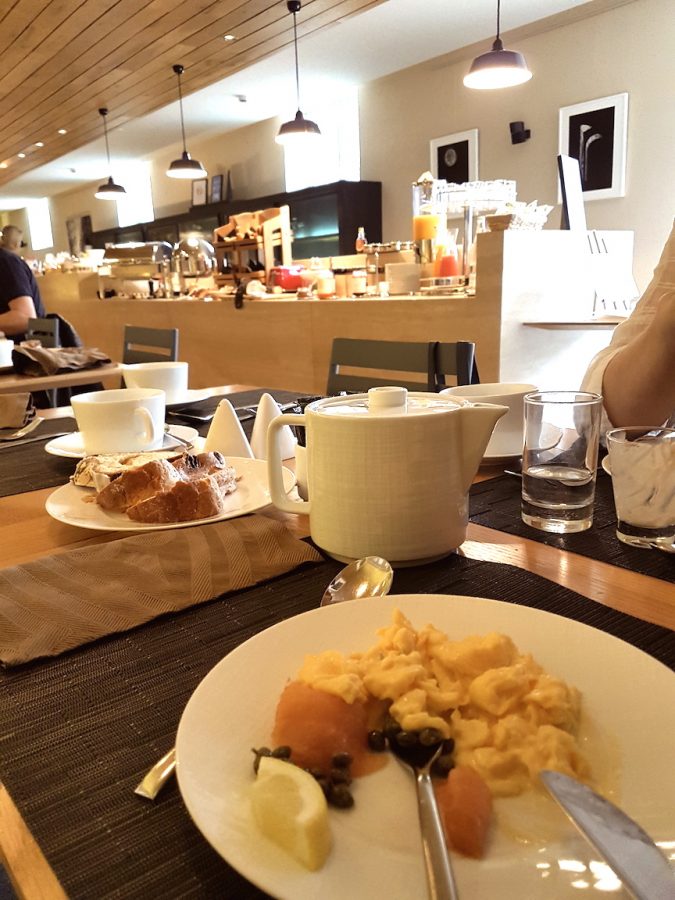 Think of Strasbourg and the enchanting wine region of Alsace during your European vacation this year. Often winners in national competitions for the beauty of its villages, Alsace offers some of the best food and drink in France in breathtaking settings. Christmas is also a great time to visit the region, and especially Strasbourg, as it becomes France’s Capital of Christmas with its vivacious market that spreads all over the city’ streets attracting millions of visitors. 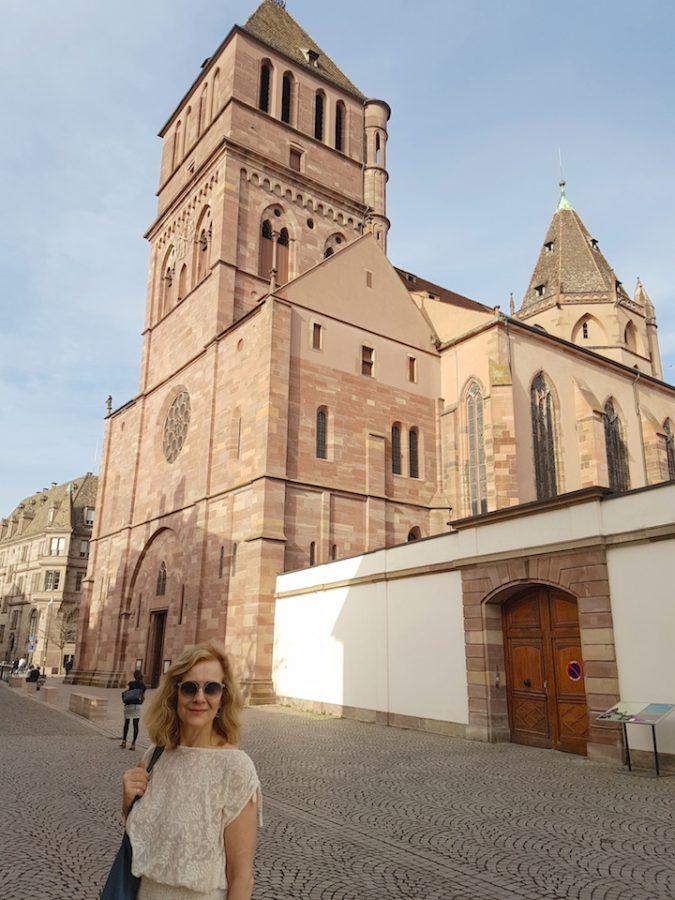 A stay at the Haras, while in Strasbourg, offers as much the pleasure of a peaceful night in a luxurious environment as the delight of visual unfamiliarity in a quaint Alsatian setting.

In The Bag: Travel Tech
Iman Sells Out Global Chic Collection of Fashion Accessories During HSN Debut
A Hotel Gem In Washington DC
Memorial Day, Minus the Masses
Previous Article

How to Watch the Royal Wedding